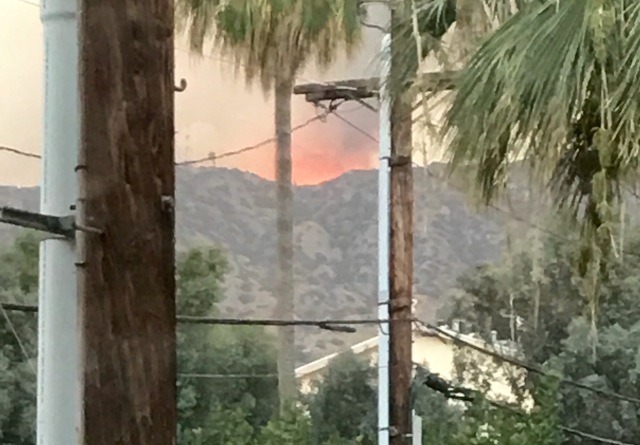 View from Mum’s in the early hours of the La Tuna fire.

What a season full of disasters it’s been…

Earthquakes.  Fires.  Hurricanes.  My heart goes out to all those affected.  And my own experience seems trivial by comparison now, but I have to say my heart also missed a beat when the recent La Tuna fire – apparently, the biggest ever in the city of Los Angeles as far as acreage goes – swept across the mountainside close to my mom’s place.

I couldn’t help thinking about what (after dear Mum, first and foremost!) I’d have tried to save if worst had come to worst.  I wondered too what landmarks around me would stand such tests of elements and time – and was surprised to realize just how much that meant to me.

Knock on wood (picture me rapping on my cranium), I haven’t suffered losses in a natural disaster – the inside of my apartment only looks like a tornado struck.  But, as in the case of the fire that had the city of Burbank in its sights, I’ve lived in the same zip code once or twice.

Like having grown up in the Bay Area, I’m no stranger to earthquakes.  I was sitting in an office on the UC Berkeley campus when the Loma Prieta quake hit in 1989.  I remember starting to take refuge under my desk but becoming mesmerized by the rattling and swaying of pictures on the wall – it wasn’t until later that I learned the extent of the destruction that temblor had caused not too awfully far away.

Now that I’ve moved to LA – well – I’m still no stranger to earthquakes.  In 1994, I was living a few miles east of the Northridge quake’s epicenter where I had the odd experience of watching newscasters announce an aftershock and knowing a few seconds later, I’d be feeling it myself.  It may seem unlucky that I was in the neighborhood of two such major quakes – but I kind of chalk it up to life as a Californian.  I accept that putting nothing heavy on the wall above my headboard might be the most important rule of feng shui on a fault line!

The closest I’ve come actually to evacuating a home was on account of a wildfire back in 1993 when I lived in Sierra Madre, California.  A blaze lit the whole hillside behind me and looked like some enormous hearth giving off what I thought was an enchanting – if highly treacherous – glow.  As evacuations were being called for in the block just above, I stopped staring long enough to pack a bag in case I got the order to leave as well.  Standing in my little apartment full of the modest treasures I’d amassed by that time, I discovered my biggest priority was to fill the bag with family photos and journals from my travels – an irreplaceable collection of kin and memories, and an interesting lesson too.

Thinking of fires, there was one making its way across a section of Griffith Park back in 2007 while I was interviewing for the job that prompted my move to Burbank.  I went ahead and took the position figuring a job in the hand was worth an inferno or two in the bushes.  And, being used to moving every few years for one post or another, I wound up relocating just blocks from the temporarily charred landscape.

My new neighbors were especially relieved that a certain pine tree on the peak behind our building had been spared – in fact, it still sits up there and has turned into a popular local destination.

The Wisdom Tree (off in the distance there)!

Shaped kind of like a mushroom, the pine seems to be known by several names, but the most popular might be the “Wisdom Tree”.  A solitary survivor of that Hollywood Hills fire (and of other minor conflagrations that I’ve watched from my stairwell be tamed by diligent firefighters), it’s now a beacon of green that draws all kinds of hikers, some of whom are moved to leave notes and wishes in a box at its base.

I haven’t made my own pilgrimage to the Wisdom Tree yet (frankly, it looks like lots of up…) but, at the beginning of the year, a couple friends and I decided to take a hike to check out another familiar sight amid the Burbank skyline – one that months later would come under siege.

When heading over to Mum’s place, this big white “B” on the hillside often catches my eye.  I got curious about its origin and, from what I’ve read, it’s been there in some form since the 1920’s (which is positively ancient by LA standards!) – maybe to tout John Burroughs High School, or the whole city of Burbank, or as the greater consensus seems to be, for Burbank High.

Although it looks quite solid from below, I found by scrambling up the little notch on which it sits that what started as a pile of white-painted stones back in the day is now a collection of carefully placed sections of white fencing arranged over a black tarp with the odd weed and patch of dirt peeking through.

One of my favorite things about reaching a lofty landmark like the “B” is having the pleasure of taking in the view from it – in this case, a view of the city where I’ve resided for the last ten years! 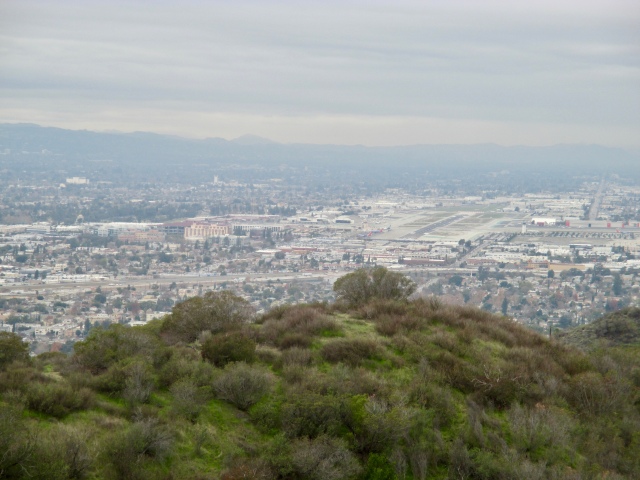 Burbank and its airport.

Eight months later, while I anxiously watched as the La Tuna flames had the audacity to creep along the crest of my hills and eventually cut a smokey swath across them, I realized that the “B” had come to mean much more to me over my decade here than some white fencing.  It represented the city that in the midst of my itinerant SoCal life (and especially now that Mummy is here!) finally felt like home.  And while I said a prayer for the preservation of property and life in the onslaught, I found myself adding a tiny wish that just this one letter of the alphabet might be spared as well.

Burbank seems to me a town made up of both reality and dreams – where a fair number of movie and television studios like Disney and Warner Bros. combine to blur the line between the two.

Since I live near Warner Bros. Studios, I sometimes find a cheery note on the door from my big-budget neighbor assuring me I can pay no mind to any pyrotechnics and helicopters that may be overhead the next day – it’s only for a movie.  I also recall being concerned the first time I observed from my office smoke and flames exploding around the distant hills – until a veteran colleague confirmed these were a regular feature of Universal Studios’ Waterworld show.  And just now, I can hear excited screaming in the parking lot across the way – again, no cause for alarm as it’s an audience getting warmed up before being ushered across the street for a taping of the Ellen show.

Life in Burbank don’t ya know!

Warner Bros. Studios with the Wisdom Tree above.

As I followed the path of September’s wildfire, I found myself wishing I’d missed a note saying that this too was just for a movie.  Alas, it was one for the “reality” column.  But I think it made me recognize more keenly how that column also includes a wealth of Burbank-anchored experiences with colleagues, friends and family – experiences to treasure as time goes by.

Mum and I ended up being among the fortunate – and I’m so grateful for the tireless work of the emergency crews that stood watch to make that so.

Once again, my heart and prayers are with those who’ve lost homes and loved ones in this alarming spate of disasters.  May they have the strength and the aid it will take to recover or hold onto what matters to them most – as I come to understand and  appreciate just a little bit better all that matters to me. 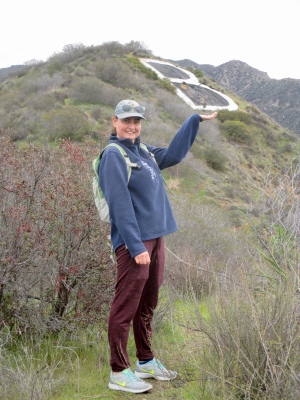 ← A Tidbit: Layers in Time
A Tidbit: Scale Fails… →
Follow TESSEROLOGY on WordPress.com