Scale is the subject of this week’s WordPress Photo Challenge!  And it spurred me to offer my “perspective” on an area in which I think I need a bit of work…

For instance – any idea what this is?

At a glance, it might seem like some idle scribblings in the dirt.  Or the work of a colony of rather artistic and sophisticated ants.  Or maybe a detailed football play drawn up for a neighborhood scrimmage (even though I don’t see the bottle cap).

It’s actually an example of how I was so in awe of where I was at the time that I paid no attention to the lack of perspective in my shot.

It’s a view of one of the excavated Roman encampments beneath the lofty stronghold of Masada!  While on an amazing Mediterranean cruise that stopped in Israel, the folks and I took a tram ride up this arid mountainside to a plateau where a palace of Herod’s once stood and where members of a group of Jewish rebels made a storied final stand against the Roman Empire in the year 73. 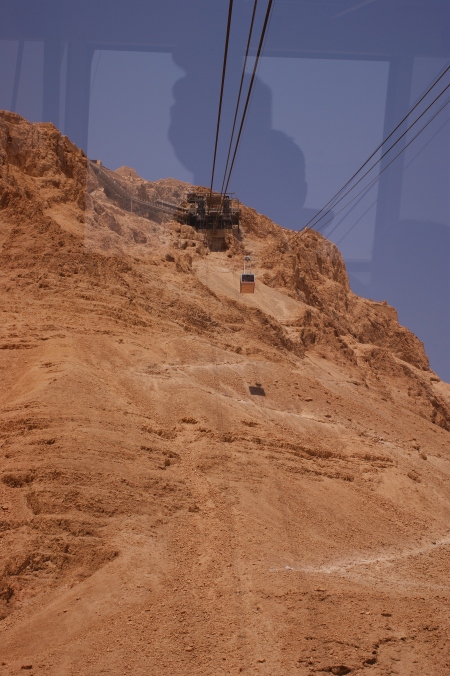 Tramming to the top!

A view of the Dead Sea!

Other pictures I took that day hint at the scope and scale of this historic part of the world!  But my Roman camp picture?  Not really.

There’s also this photo I took at another cruise destination:

It’s a pair of ancient storage jars at the Minoan palace of Knossos on the island of Crete.  Maybe the fence is a clue to their height (or maybe it’s there to keep them from escaping and running amok as jars do) – but these vessels were actually taller than I was!  It’s just hard to get that from my picture.

And finally, there was the occasion where I at least showed an awareness of scale – but I’d still have to categorize the result as a “fail”…

I was driving up to California’s Sequoia National Park and just had to stop to capture what appeared to be a mass migration of tarantulas across the road and countryside.  That’s something you don’t see every day!  Which, by the way, is totally fine with me.

Fascinated though not fond, I thought I’d get a shot of one of these guys from as safe and respectful a distance as I could manage.  But I noticed at the last moment (this time… ) that without anything else in the frame for perspective, you couldn’t tell it was no smallish spider.

So I got the brilliant idea of tossing the lens cap from my camera near this traveling tarantula so its size would be more obvious.  And I think it worked!

It worked up to the point where l realized I’d actually have to retrieve the lens cap.  Ever been lunged at by an arachnid you’ve annoyed?  It’s no picnic.

Anyway, I did summon the courage to get the cap back – eventually.  And I got some practice that day in employing scale in my photos, with a bonus life lesson in thinking things through.  Did the tarantula experience help me take better pictures?  Possibly.  And did it keep me from ever blundering again into situations without weighing the consequences?

← Burbank: The “Home is Where The ‘B’ Is” Bit
The Poppies in My Lapel Bit →
Follow TESSEROLOGY on WordPress.com