The “You Know It’s Fall When” Bit

I’ve always loved the fall!  And after a fry-an-egg-on-the-sidewalk-hot summer here in LA, I am really looking forward to it this year – even if, as I’ve noted before, Angeleno autumns don’t tend to be textbook (it’s approaching 100 degrees outside as I’m typing this…). 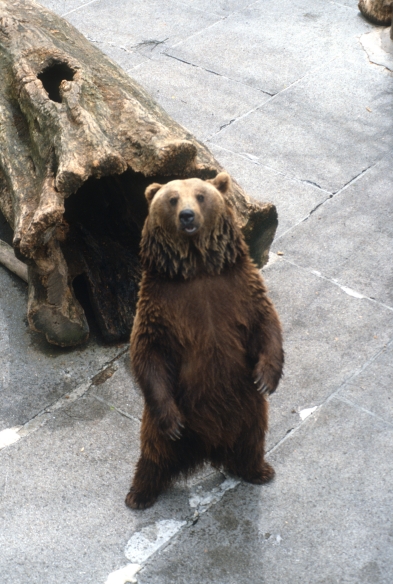 Having spent half my life in NoCal’s Bay Area and half in SoCal, my seasonal cues just aren’t the same as I see on cards and in commercials.  Not as many leaves change color and flutter down into yards (there are palm trees in my apartment’s yard).  And the air might get nippy but it rarely bites.  Still, certain cherished traditions and travelings definitely say “fall” to me – they’re the ways by which I’ve come to know and love this time of year, probably the best of all:

One of my favorite days of the whole year is the first one where I stroll into my local coffee place and find pumpkin spice lattes on the menu board!  Now I can celebrate all things cucurbita – that’s the plant genus that includes pumpkins and other great gourds that make their appearances in the fall!  Just when I’ve missed them to the point of being ready to eat a Yankee Candle, the butternut squash soups and the pumpkin lattes, cookies, pies and such return to restaurants and grocery store aisles to save me and to make the season official!

Far and away though, my favorite gourd-y regalement remains acorn squash the way Mum used to fix it when I was little.  Decades on, just recalling the mingled aromas of sausage, butter and brown sugar baked in a little squash nest call up comfy thoughts of childhood and home! 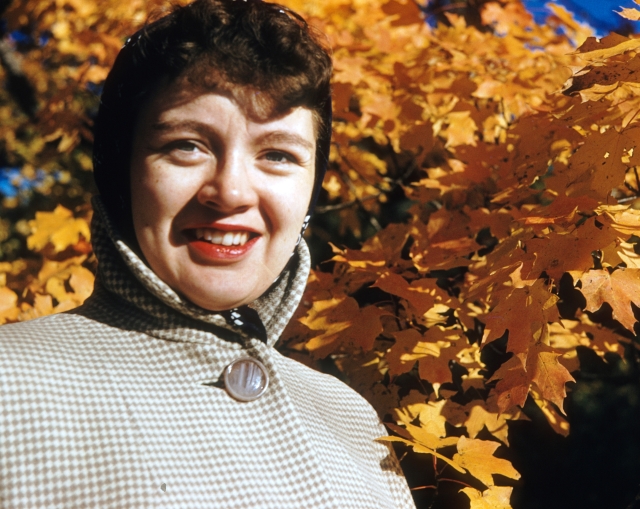 A youthful Mummy on an October day in Wisconsin.

BACK TO THE BARD

As a kid, I used to recognize fall as the time to return to school and, being a big little nerd, I’d get pretty excited about it!  When I grew up and entered the working world (perhaps with somewhat less sustained excitement…), I accepted jobs as necessities and as four-seasoned things – but my periodic escapes from them tended to cover all the seasons too!

There were two trips I traditionally took each fall for quite a few years – one being to get my Shakespeare fix!  For several decades, the folks and I would meet up and head to Ashland, Oregon for the Oregon Shakespeare Festival.  We started out going in the summers but gradually moved the trip to September when we could also celebrate Dad’s birthday. 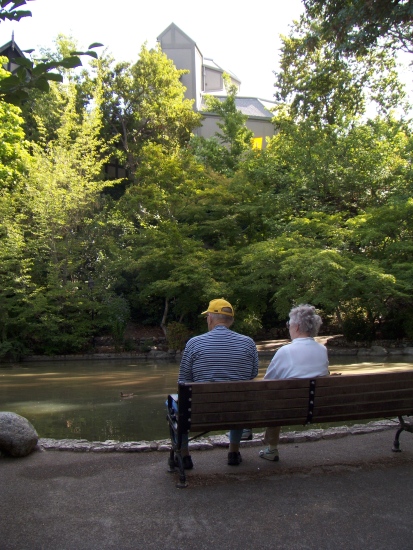 The Elizabethan Theatre from Lithia Park.

As I’ve covered before (in The Great Ashland Migration Bit), it just wasn’t a proper September unless I’d made my pilgrimage to Ashland, stopped en route to say “hello” to the elk hanging out along the Umpqua River, finished off a lunch with berry cobbler at the Wolf Creek Inn, and then taken in five plays over four glorious days and nights, discussing them at length over meals with the folks, and ending each evening with a nightcap of chocolates from the local sweet shop.

Now that was the way to greet autumn!

I also knew it was fall when, come November, I’d pack up my hockey gear, sticks and luggage to fly to Vancouver for the women’s ice hockey tournament hosted in nearby Burnaby (where, yes, a good deal of on-ice falling on my part did occur…).

One of the terrific perks of this trip was to get a taste of the fall in other climes.  Along with obligatory between-games shopping excursions to Roots and Canadian Tire, a walk or rented bike ride around gorgeous Stanley Park was a must! 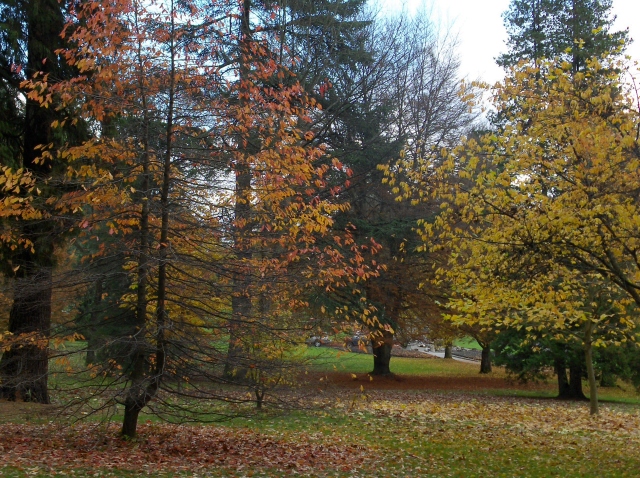 Okay, slipping in just one from my “minus” column.  Sooner and sooner it seems each year, I know it’s fall when Christmas carols, decorations and other department store “cheer” arrive.

Maybe it was Mum’s careful training when I was little that makes me cringe today at the early sighting of some creepy elf on a shelf.  Mum was born right on Thanksgiving and always insisted that due and full attention be paid to her holiday – and if Santa happened to appear before the Pilgrims were done being thankful, well you have not seen a blacker Friday…

I’m all for Christmas spirit – but invoking the holiday while there’s still Halloween candy on Aisle 5?  I will never be ready for that.

Okay, what I am ready for is to mark fall’s arrival by the return of two of my favorite sports – college football and NHL hockey!

My passion for hockey came later in life – but football has been part of every fall for as long as I can remember!  As a little girl, if we weren’t attending games just a few blocks down the street from home at El Cerrito High School (my big brothers’ and my alma mater!), we were close enough to hear them called by math teacher/play-by-play announcer extraordinaire, Sandy Berman, on many a fall Friday night! 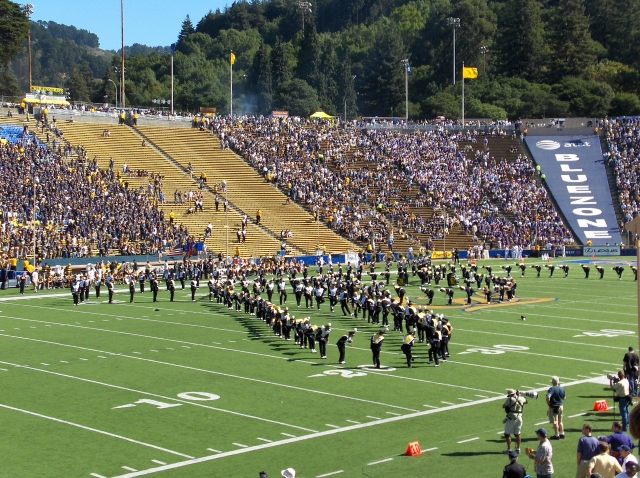 Autumn Saturdays were, of course, the realm of college football!  Having grown up on the UC Berkeley campus (where Dad was a professor and I went on to be a student), the Cal Bears have been and always will be my team.  I’ll own that a fair amount of heartache has gone along with that allegiance – but there have been magical moments too! 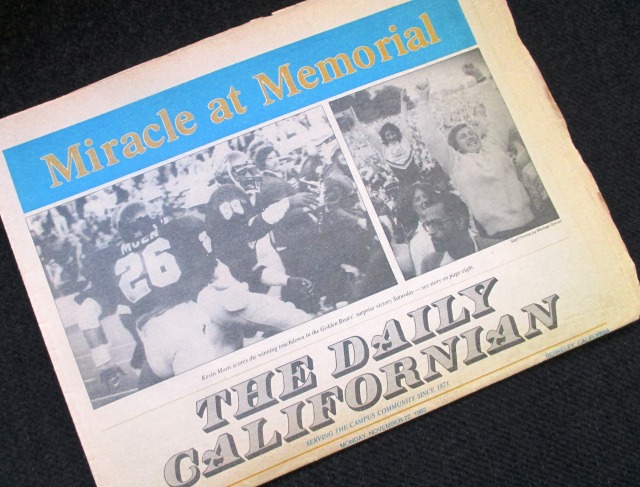 I catch more games on tv these days than from the stands – but watching always brings me back to those wonderfully crisp and cloudless days at Memorial Stadium where the fall coloring was strictly blue and gold!  And my hopes for a winning season?  I’m gonna say they “autumn” eternal!

Since moving to LA, ice hockey has jumped to the top of my list of must-follow sports – and the start of the LA Kings’ next campaign is just around the corner!  So nowadays, fall means breaking out my jersey, adding a pizza delivery place to my phone’s “favorite” contacts, and pledging with Mum not to miss a single game of my Kings or her beloved Blackhawks!  A difficult task – but, gosh darn it, some things just have to be done! 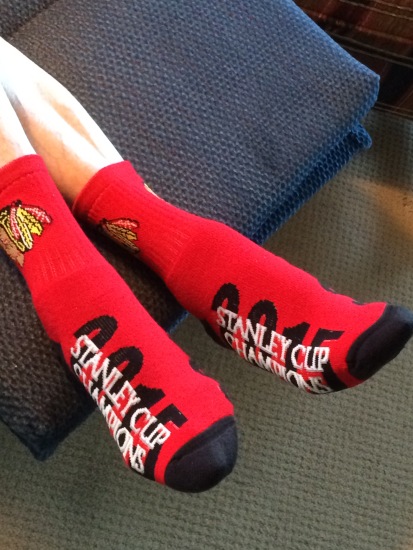 Footwear for the true hockey fan!

Finally, even if the weather and the leaves don’t clue me in, I still know it’s autumn just by a certain change of feeling.

I was quizzing Seth (a good friend and great music aficionado!) about songs to do with the season.  He was able quickly to rattle off lots of titles – but the one that instantly struck the right chord for me was Simon & Garfunkel’s somber “April Come She Will”.  That song would be the perfect soundtrack under my walks around the neighborhood (on the lookout for pumpkin lattes, of course!) which want to slow to a melancholy stroll this time of year.

It’s when I begin to think even more about the past.

In this, the season of harvesting, I end up with a greater yearning to reap memories for a little while than sow them – to lay them in store for safe keeping as I’ve indulged in here.  Sweet memories of friends and family I’ve loved and lost.  Of those I feel so blessed still to have within reach of my embrace.  Of football and hockey games.  Home cooked delicacies.  Trips to the north and all over the world.

Thoughts as pleasing as a still-warm slice of pumpkin pie…

Well, enough harvesting for now!  Sending out my best wishes for a safe and happy autumn – and for vast helpings of whatever says “fall” to you! 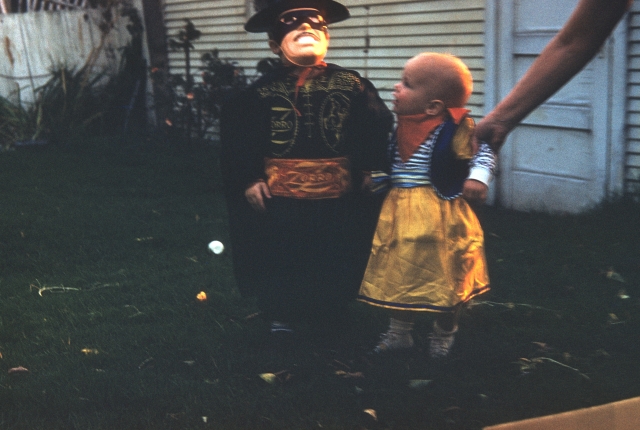 The Boys (and I believe Grandma K’s arm) on Halloween around 1959. 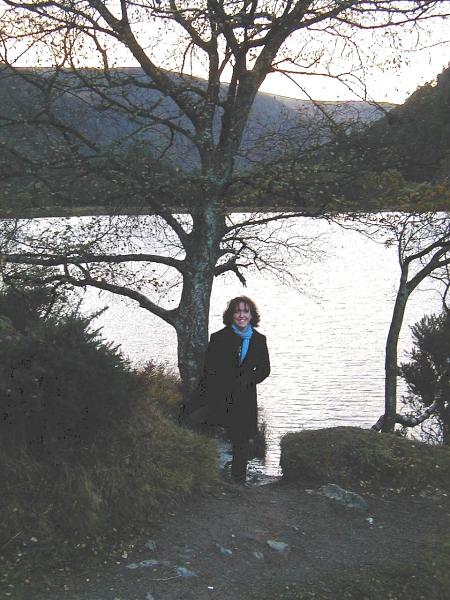 Dear friend Judy G on an October eve at Glendalough in Ireland. 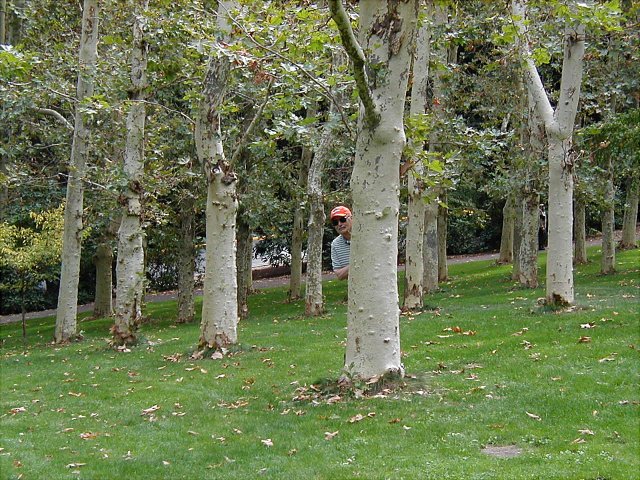 Duddy in Lithia Park at Ashland. 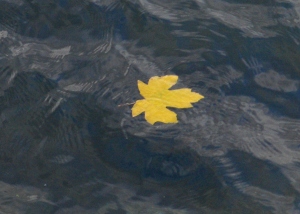 ← THE “ALL THE SHIPS (NOT) AT SEA” BIT
A Tidbit: Layers in Time →
Follow TESSEROLOGY on WordPress.com