The ocean has always held a special allure for me!  Despite a tendency to get seasick, I’ve truly relished opportunities to get out on the waves in ships of various sizes and types.  But I’ve also discovered that ships can transport a person to other places and times without even leaving the shore!  Here are a few of those expeditions:

As an LA resident, I’ve “booked passage” many a time on the grand old Queen Mary down in Long Beach where she enjoys a full retirement:

Onboard, I’ve viewed temporary exhibits ranging from the glitzy treasures of Russian tsars to the poignantly ordinary belongings of passengers on the doomed Titanic.  I’ve shared Thanksgiving dinner with family in a Queen Mary restaurant, celebrated the New Year in one of her stately salons, and even spent a couple nights as a hotel guest.

And the best part is I didn’t get seasick once!

It was a delight to imagine myself a real (and really upscale!) passenger promenading round the Queen Mary’s decks as she cut a majestic path through Atlantic waters back in her Art Deco day.  And it was a thrill of a different kind to keep a weather eye out for the ghosts that are said to haunt those decks at night…

Her nickname, in fact, is the “Grey Ghost” – but not because of her phantom patrons.  During World War II, the Queen Mary picked up the moniker when she was converted from luxury liner to troop ship and transported Allied soldiers into the fray.

As a teenager, I toured another ship that saw military service – one which was also easy on my delicate constitution.  It was – well – the USS Constitution.  Once a famously sturdy ship that saw action during the War of 1812, “Old Ironsides” is now moored at one end of Boston’s history-filled Freedom Trail (which I wrote about in The Red Line Through Time Bit): 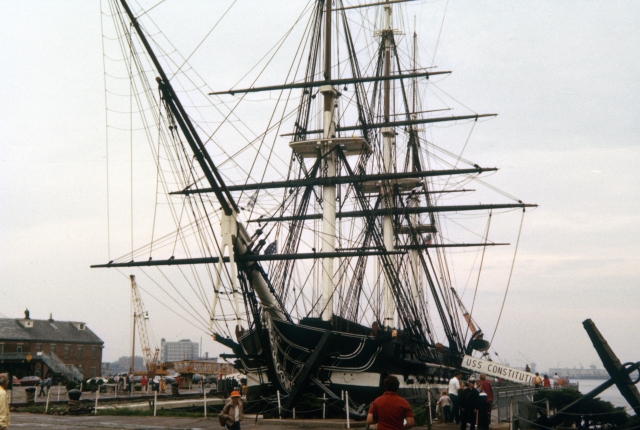 I understand she’s undergoing repairs (although the USS Constitution Museum is open) and still takes a turn in Boston Harbor on special occasions – but the Constitution stayed thankfully put the day I went aboard.  I remember having to crouch as I wandered below decks, conjuring the chaotic and claustrophobic heat of 19th century battle!

Years later, I got to wander around this ship which also has quite a place in military history:

She’s the USS Missouri – the “Mighty Mo”! After service in several wars, she currently rests in Hawaii in Oahu’s Pearl Harbor across from the remains of the USS Arizona – the two ships serve as moving bookends to US involvement in World War II.  Beneath her memorial, the Arizona still lies with some of her entombed crew where she was sunk during the Japanese attack on December 7, 1941.  And it was in a ceremony on the Missouri on September 2, 1945 that documents were signed affirming Japan’s surrender from the war.

Historic spot on the Missouri.

Seeing in one morning both the tears of oil that still leaked from the Arizona as well as the very place on the Missouri’s deck where a tragic chapter in history closed was quite a powerful journey. 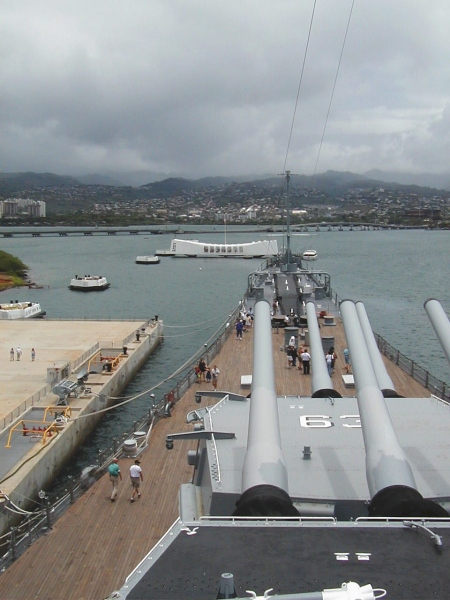 View of the Arizona Memorial from the Missouri.

I’ve also had the pleasure of “journeying” on stationary ships that gained fame for reasons other than warfare!

Like at the Vancouver Maritime Museum which looks out over English Bay and houses inside – yes, inside – the schooner St. Roch:

This 20th century Royal Canadian Mounted Police ship has the distinction (among other nautical records) of being first to circumnavigate North America.  As I stood on the deck all warm and un-queasy, it did give me a shiver to picture this (to me) not very large ship and its intrepid crew as it gamely faced down all weathers to push at the boundaries of the possible – what adventures those must have been!

Before the St. Roch began making her rounds, other adventurous hearts were arriving on what were to become Canadian shores in ships like the  Hector: 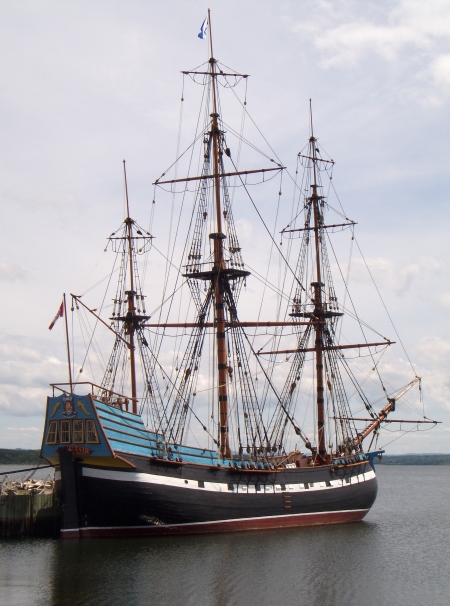 Replica of the Hector.

The Hector was part of the first wave of Scottish immigrants who left home in 1773 to build on foreign soil a new Scotland – Nova Scotia!  This replica sits in the quay in the town of Pictou beside a museum – and both provide vivid looks at the passengers’ arduous 11 week voyage during which there were days lost to storms and lives lost to illness.

Although my own Scottish ancestors (the Gunns) didn’t arrive on the Hector, I have to think their voyage was probably similar – and I sure admire their courage in undertaking such an odyssey! 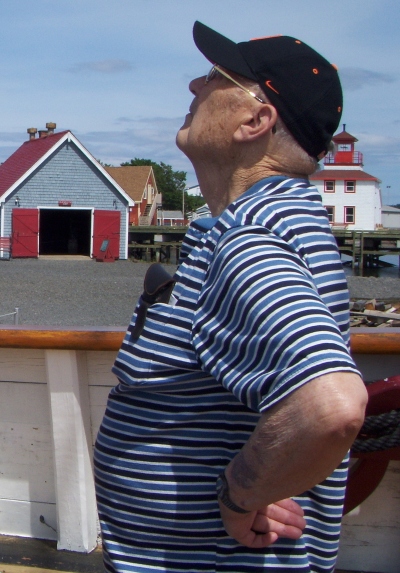 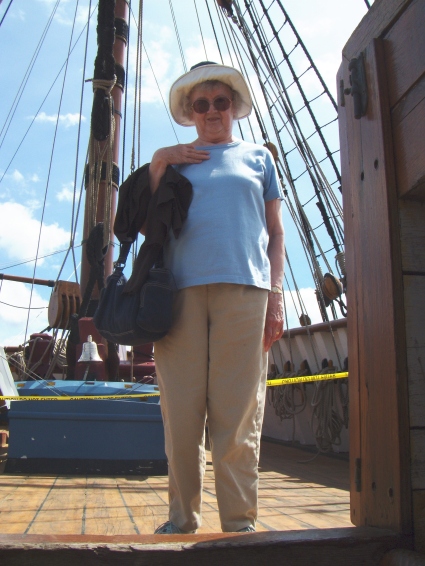 I also have Irish ancestors who ventured over Atlantic seas to the US – some, maybe even before the US had come to be!  While visiting Ireland (just an overnight flight away now), the folks and I came across another replica ship, the Dunbrody, in the town of New Ross in County Wexford.  Originally a cargo ship, the real Dunbrody was used in the mid-1800’s to carry famine-starved immigrants to America and hopefully to a new and bright beginning.  Roaming the cramped ship and talking to costumed actors playing passengers pointed up how difficult and dangerous a choice this was – and how desperate and brave those who attempted it surely were.

Replica of the Dunbrody.

I’ve only ever been a fleeting tourist on ships like these – except for one particular day.  I volunteered once at the Festival of Sail which was in San Pedro at the time, and was assigned for the day to the Eagle.  Although this tall ship was plenty seaworthy, I was relieved (for reasons noted above…) that she would not be taking part in the mock sea battle later on. (And no pictures of her, I’m afraid – I was “on duty” after all!)

The beautiful USCGC Eagle is a US Coast Guard barque, although earlier in life, she was a German ship before being claimed for war reparations after World War II.  My responsibilities aboard her were light, consisting only of standing at the top of the gangway to welcome visitors, dispense festival info, and point out a step they needed to mind.  I didn’t bother to give my spiel to ship cadets who were returning from leave throughout the day.  I just observed as each would salute the officer of the deck and then turn toward the bow to salute the ship itself.

By the afternoon, I felt quite the expert at my job!  That’s when I noticed a stooped old man in a thick, military looking coat laboring slowly even with help up the gangway.  Since he seemed a bit long in the tooth for a cadet, I launched into my practiced maneuvers, cheerily chirping:

“Welcome aboard! Please watch your step there!”

But the old man just stood looking the ship up and down. Finally, he carefully removed withered papers from his coat pocket and showed them to me – they were a faded set of typed orders.  Turns out that as a young serviceman, it had been this gentleman’s assignment after WWII to join the Eagle’s crew and sail the prize from Germany to her new home.  When the man heard she was nearby, he couldn’t resist coming down to give her one more salute – and one as well to the officer of the deck of course!

Ships are sometimes referred to as “vessels”.  And the ships on which I’ve had the privilege to play and imagine have been vessels for cargo and passengers in their time – but still today, they carry much, much more.  Even from a stationary post, each leaves in its wake a uniquely important legacy of intentions and accomplishments – and stories.

Whether in dry dock for a time, or tethered to a pier, or even “all at sea”, it’s special to make a connection with such ships, and with the souls who’d once been onboard and been buffeted and becalmed before me.

There’s always something from them I can learn.

P.S.  Couldn’t officially include the boat below since it was moving when I rode it down the Thames (a trip I wrote about in The Greenwich “Me” Time Bit) but, after having been riveted by the film Dunkirk, I’m adding here a pic of my tour boat that bears a plaque (above the middle window) showing it was among those used to answer the call to save troops trapped at Dunkirk in 1940.  It was an honor to be aboard her!

← A Tidbit: Snowy
The “You Know It’s Fall When” Bit →
Follow TESSEROLOGY on WordPress.com