THE RED LINE THROUGH TIME BIT

I always look forward to the 4th of July!

And what’s my favorite way to honor our breaking away from England to try something completely new?  It’s to keep up tried and true traditions like eating too much picnic food, listening to marches by John Philip Sousa, “ooh”-ing and “ahh”-ing over fireworks – and watching the movie 1776.  This year’s festivities will have even more meaning for me since I recently got to retrace our Revolutionary footsteps on the Freedom Trail in Boston! 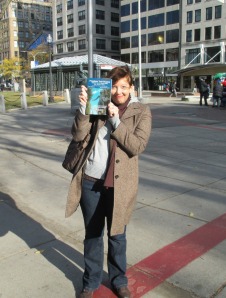 Getting to see my dear friends Jen and Ali would have been reason enough to journey east (naturally!), but it didn’t hurt that a history nerd like myself could also get a first-hand look at sites that were so important along our road to independence.

What a super idea the Freedom Trail is!  All you have to do is stick to this big red line painted on the sidewalk and you can wander around modern Boston and right through U.S. history.  Being geographically and directionally challenged (shoot, I get lost in IKEA), this was a grand opportunity to disappear into our nation’s past and still make it back for a great Italian dinner in the North End!

Outside the Visitor Center on Boston Common, I was totally ready to hit the just under three-mile trail with my newly purchased guidebook!  Yeah, an actual book is kind of old-school (you can also get Trail info electronically) but I wanted a souvenir.

Along the red line of the Freedom Trail, strung one after another like wonderful historic beads, were all these places I’d read about as a kid.  I wish I had a nickel (rather than a shilling, of course) for every time I stopped and thought:  “Oh wow, this is right where it happened…”

Like where Paul Revere lived during the days when he was stirring up sentiment for independence by depicting the Boston Massacre and undertaking his famous midnight ride to rally fellow patriots to action.

And where two lanterns were placed in the steeple of the Old North Church to signify the British would make their way to Lexington and Concord by sea.  We all grow up hearing about that event – but at this spot on the Freedom Trail is where those lanterns actually glowed!

Also along the way are somber cemeteries where Revere, Samuel Adams and other key Revolutionary figures are laid to rest.  And there are stately buildings where I bet you can still hear Revolutionary echoes inside.  Like in Faneuil Hall where critical meetings were held, and the Old State House where the Boston Massacre took place just outside.

I’d have loved to spend more time at each landmark – and I did my best to cover as much as I could in an afternoon – but I didn’t end up taking in all the Freedom Trail has to offer by any means.  I ran out of steam across the water from Bunker Hill and its Washington-like monument.  (I wonder if I’d have lost steam too before completing the ride through the night that Revere, William Dawes and Samuel Prescott braved:  “The British are coming!  The British are – oh heck, they’ll figure it out…”) 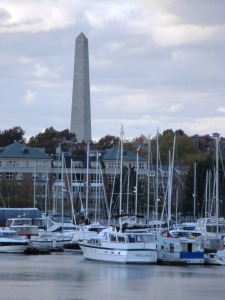 Yes, it’ll be a dirty job but I’ll just have to bother Jen and Ali again sometime for more touring, strolling around Harvard and the Museum of Fine Arts, and maybe for a giant piece of Boston Cream Pie.

Still, when I have my traditional 1776 viewing this year and John Adams grumbles about Congress and how “with one hand they can raise an army, dispatch one of their own to lead it and cheer the news from Bunker’s Hill,” it’ll be an extra pleasure knowing exactly where that is!

Sharing this movie with family is a very special 4th of July tradition for me – even if a musical about the Declaration of Independence can prove a pretty hard sell to others.

1776 is a delightful movie full of humor and history and wonderful performances by the likes of William Daniels, Howard Da Silva, Blythe Danner, Ken Howard and the golden-voiced John Cullum  – but, alas, declaring Cullum absolutely mesmerizing as he performs a number about the Triangle Trade does not always fill the living room seats as it rightly should… 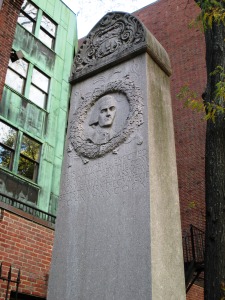 Nevertheless, I’m going to enjoy even more watching the scene where John Hancock fixes his name with such authority to that world-changing piece of paper – and I’ll recall how I saw his memorial.

I’ll be able to picture the Old State House building and its balcony where the Declaration was read to the people of Boston a couple weeks after the document was debated and hammered out against ridiculous odds – and with the large task of backing it up yet to come. 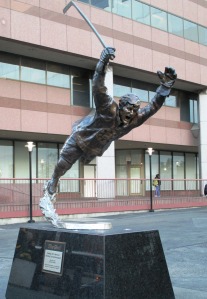 Bobby Orr didn’t play a role in 1776 or in the fight for American Independence.  But hey, as a Boston Bruin, he did revolutionize the job of the defenseman in NHL hockey – and his statue outside TD Garden is pretty awesome!

Anyway, getting my 1776 fix nowadays is as easy as popping a DVD in the machine – but establishing the tradition had its challenges.  When you wanted to watch a program back in the day, it’s shocking now to think how you actually had to find it in the t.v. guide and be settled down on the couch with your loved ones at the appointed time.  How did we ever manage..?

And there were other challenges over the years.  One July 4th, I paused on my backpacking travels in England to break out the hoard of fantastic gold-colored one-pound pieces I’d been saving so I could stand in a red phone box and feed them into the phone for an Independence Day call to the folks.  I figured this was the year my 1776 tradition would just have to be broken – and, honestly, being in Salisbury instead was not a bad consolation prize.

But Dad expected I’d call and had a recording of the soundtrack waiting by the phone so we could at least share the overture.  Dad did sweet things like that.

So why all the focus here on some movie?  Well, because it’s part of my own red line through time.  A line that reaches back to my childhood with family and friends, and goes all the way through to the Revolutionary heritage we’ll be celebrating soon.

And my celebration this year will be all the richer after my terrific time in Boston.

Whatever your traditions may be – watching the Boston Pops at the Hatch Shell (visible below – or you can stream the concert live this year!), gnawing on corn on the cob, or cavorting around the yard with a fistful of sparklers – here’s hoping you have a very Happy 4th!