THE THRICE IN A LIFETIME BIT

They say breakfast is the most important meal of the day.  And when it comes with a view like this one, I have to agree!

My parents and I stumbled onto it the morning after arriving in Athens, Greece, and checking into the fancy Hotel Grande Bretagne on Syntagma Square.  As we jet-laggily followed signs to a restaurant on the hotel’s windowless top floor, we were just hoping for some good strong coffee – instead, we were treated to this view of the nearby Acropolis that took our breath away and became a totally unexpected, once-in-a-lifetime moment.  (And the coffee was decent too!)

More breathtaking to me is the fact that it wasn’t my first time seeing this spectacular landmark!  I’ve actually found myself in the shade of the Acropolis three times in my life – each time under very different circumstances.

The time before, I had to fly out to help my dad who’d taken ill while on a Mediterranean cruise. Miraculously, his life was saved that scary day and I’m happy to say Dad recovered and went on to cruise again!  Of all Greece’s gifts to civilization – democracy, art, yogurt – this is by far the most precious to me.

In a way, that third visit was a triumphant return for the family.  And, after the lovely “welcome back” gift of that breakfast table Acropolis view, we could hardly wait to get an even closer look – well, we and absolute tons of other tourists.  Not to be smug (well, maybe to be a little smug) but this wasn’t at all like the first time I’d been lucky enough to be there. 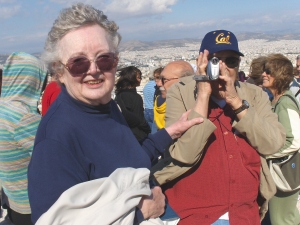 In the summer of 1985, I was a college student backpacking around Europe where I kept hearing and heeding the siren call of history – this pull to seek out “old stuff” as I artfully wrote in my journal.  So, instead of remaining with companions on the Greek island of Corfu for a few more days of sun, sand and ouzo, I took off on my own for Athens.  My passion may also have been fueled by the bugs and sunburn that were keeping me up at night anyway.  But no matter!  This would be my personal quest – my Homeric odyssey through time!

And so I embarked on a solo journey that began with a 7:00 a.m. bus ride to Corfu Town.  Well, it should have begun that way – but the bus was late which caused me to miss my connection.  So the great adventure actually began with my killing a whole day before catching the 6:00 p.m. bus – my own rickety “chariot” – which bore me all of about 100 yards to the pier where I was asked to get off and buy a ticket for the mainland ferry.  Since this wasn’t Chitty Chitty Bang Bang, I’d wondered how that was going to work – well, fair enough.

Cruising across the ocean gave me a chance to make friends with fellow travelers Darrell from England with his Ionian Sea blue eyes, and the perky Sandy and Mandy from Australia.  We reached shore at Igoumenitsa, piled back into the chariot and hung on for a perilous ride along steep coastal cliffs.  Maybe I should have consulted an oracle before taking this trip because about an hour later, just as the last bit of summer sunlight disappeared, our chariot came to a big old grinding halt.  I squinted through my dirty window to see that our driver was ambling past with a tool box.

Well, that couldn’t be good…

But the transmission gods were smiling because after just a few minutes, we were underway again – only to break down two more times.  On the second occasion, I figured as long as the chariot was making a pit stop, maybe I would too.  So I jumped out and snuck back up the dark road for a bit of privacy.  It was a good plan – except repairs went faster than I figured and I suddenly found myself watching as either the brakes of the chariot failed or it was just heading down the hill on its own power.  Either way, it was without me.

When it finally occurred to me to do something, I started racing down the rubbly road hoping the chariot would break down yet again.  Thankfully, Sandy (or Mandy – bless whichever one!) noticed my absence and had the driver wait – so the quest got back on track and, after one more middle-of-the-night ferry ride, I arrived before dawn at the bus station in Athens nearly 24 slumberless hours after my odyssey began.

My first mission was to hit that flat-topped hill I’d been getting glimpses of through the orange haze ever since we arrived.  I was so sleep deprived by then that it didn’t surprise me when, as Sandy, Mandy and I made our way toward the Acropolis, I’d started hearing bells.  But the Aussie girls assured me there really were morning church bells ringing which added to the drama as we stepped through the threshold of the Propylaea – the grand ruins of the gateway onto the Acropolis and into the glory that was Greece.

We wandered around an arid, ancient garden of fallen stones and columns, admiring the stately square Temple of Athena Nike, and the Erechtheion with its columns in the form of robed women with really awesome posture – the Caryatids.

But the most imposing structure was the Parthenon.  Built in the 400 B.C.’s to honor the goddess Athena, it has – with a good amount of wear and tear – remained standing despite such indignities as use for gunpowder storage, the removal of some of its most ornate features, and the ravages of smog from the modern city below.  Yet there it was, witness to centuries of triumph and turmoil and still surviving.

As I said, my experience was different this time because, arriving so early, we’d beaten the tourist hoards and gotten a feel for the place practically by ourselves.  Yes, I appreciated the opportunity and the view – and I’d really labored for it – but, being much younger, it was an understandably narrower one.  I did have a genuine reverence for the “old stuff” – but then again, I was at a stage in life where my jeans that had faded to just the right color were old.  45 record albums with the plastic thingies in the middle were old.  All people over 30 were old… 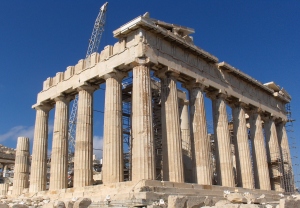 Years later, after triumph and turmoil of my own, maybe I better appreciated the experience and paused a bit longer to ponder not just the age of these structures but what that truly represented.  The morning when I stood with the folks on the Acropolis amid swirling winds and crowds and gazed up at those marvels of an earlier day, I saw and appreciated them as examples of strength, grace and endurance.  How incredible to have gotten the chance to have three such distinct and special views!

Not to be greedy or anything but I’d sure take the opportunity to stand there again in breathless wonder.  And I’ve certainly learned that you never can tell!  Regardless of what the future holds for me, I’m going to hope – no, to trust – that beyond their being enduring, glorious places like the Acropolis will also prove eternal.

← THE “WE” IN “TEAM” BIT
THE RED LINE THROUGH TIME BIT →
Follow TESSEROLOGY on WordPress.com