Bird’s eye (or camera thrust out the hotel window’s eye) view of Manhattan!

Welcome to Part 2 of my “speed date” with New York City!

The thing is I was barely in Manhattan 24 hours (a few of which were spent sleeping), so there wasn’t time for the proper tour of a museum, or the taking in of a musical or a play.  Like a speed date situation, it was really only opportunity enough for a fleeting impression – yet what an impression it was!

As covered in the last post, Day One of my whirlwind New York visit included a landmark-filled walk around Midtown (led by my NYC-savvy pal Dee), a delectable Italian dinner and a thrilling hockey game in Madison Square Garden!

And as if all those attractions weren’t enough (not even mentioning the dramatic overtime victory for my LA Kings!), companions Dee, Dedrie and I savored it all through a stunningly beautiful break in otherwise freezing February weather – a great relief since my pre-trip practice attempts to operate a camera while wearing mittens and juggling an umbrella hadn’t gone especially well…

Our fantastic meteorological fortunes even held for Day Two!  We awoke to a brisk and sunny morning – perfect for another day of strolling around Manhattan!

Once again, I wisely trusted Dee to set our agenda as I didn’t want to do a bunch of homework only to come up with an unrealistic schedule.  Letting Dee figure out every single detail of where we’d go, how we’d get there (she’s an awesome cab hailer by the way!) and where we’d stay was not laziness on my part – it just made good sense.  Anyway, per Dee’s plan, we began with a cab ride south through the Financial District to Battery Park – the jumping off (technically, sailing off) point for iconic spots like the Statue of Liberty.

After being happily hemmed in by giant buildings the day before, it was also a pleasure to find myself out in the open where I could get my bearings!  On a nearly cloudless and crowd-less day, I thoroughly enjoyed rambling among the Battery’s host of monuments to veterans, immigrants, mariners and more. 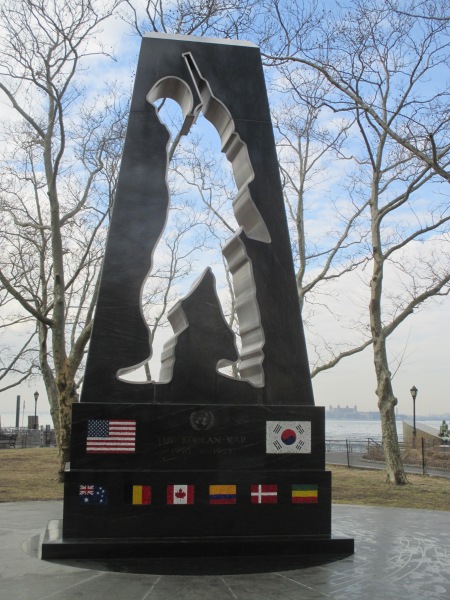 East Coast Memorial to missing American servicemen who lost their lives in the Atlantic in WWII.

But the real attraction for me was to squint across the Hudson at the view several of my ancestors must have had a few generations before!

Back in 1899 (according to the Statue of Liberty-Ellis Island Foundation’s collection of searchable passenger records), two ships – the Teutonic from Liverpool and the St. Paul out of Southampton – glided into these waters carrying two of Mum’s grandparents whose journeys had begun in Finland.  And it was right across from the Battery on Ellis Island where they first set foot on the soil of their adoptive country!

I don’t know if I can grasp how my teenaged great-grandparents would have felt that day, having left everything familiar behind to start life in a place where even the language would be new.  But I like to think they were among those who surged on deck as their ships entered the harbor to draw confidence and hope from the image of Lady Liberty and that welcoming beacon! 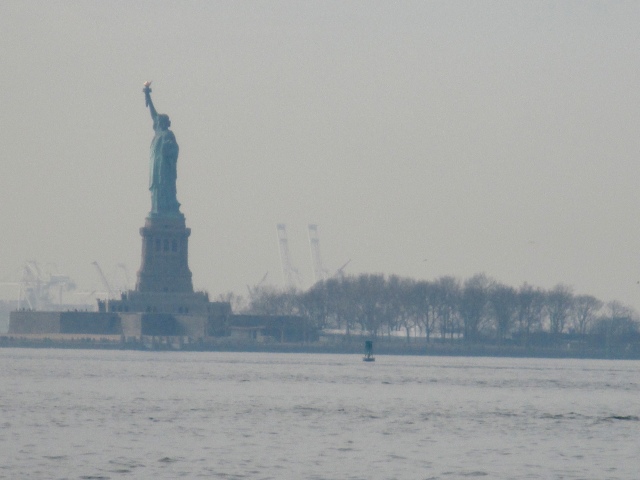 Statue of Liberty from Battery Park.

From Battery Park, our next New York destination had loomed all morning behind us.  Heeding its somber call, we headed back north up a long pedestrian avenue to the site of a horrifying attack designed to destroy the confidence and hope of the city and of a nation.

We went to pay our respects at Ground Zero. 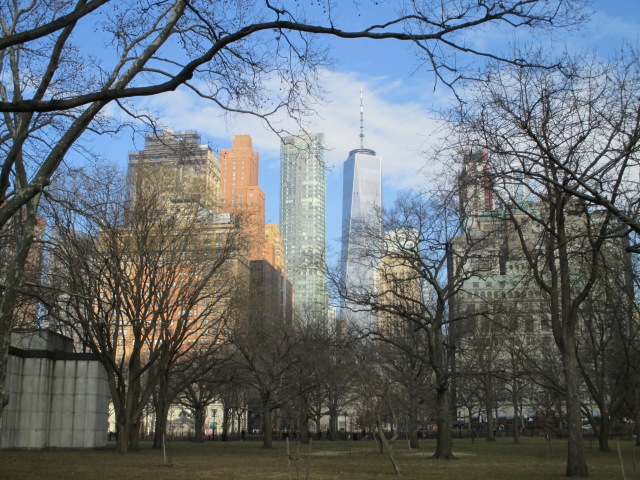 One World Trade Center (the Freedom Tower) from Battery Park.

There, the foundations that anchored the lofty Twin Towers until September 11, 2001 are now marked by huge, square reflecting pools into which water tumbles from every side and slips away to unseen depths at their centers.

We didn’t make time for the museum this trip but did wander the grounds to view some of the names of the dead etched along the edges of the pools (I didn’t take pictures right at Ground Zero – one of those choices one makes in the  moment…).   Being hockey fans who’d planned our visit around the Kings game, we thought it fitting to locate the names of Garnet “Ace” Bailey and Mark Bavis who had been scouting for the Kings when the plane that was to take them home to LA was instead sent into the South Tower.

I couldn’t seem to keep from staring at the empty center of that South Tower pool where water flowed down and out of view.  It was like standing beside some big abyss into which so many and so much disappeared that day.

Only a matter of steps away though was a building that called to mind very different images of the time – St. Paul’s Chapel.  Despite being so near the 9/11 devastation, this 18th century church somehow survived apparently without so much as a broken window.  Once a place of worship for the likes of George Washington, St. Paul’s immediately became a healing refuge for the rescue and recovery workers who would toil nearby for months to come.  Proof that though much was lost that day, humanity and grace were not.

As Dee, Dedrie and I continued north, we passed many a storied and striking New York structure!

The Brooklyn Bridge (over which I’ll venture one day!).

Although we soon had to catch a train back to Connecticut, we did pause on our way through Greenwich Village to soak up a little wholly unexpected sunshine in vibrant Washington Square Park!

Washington Square Arch (looking up 5th Avenue with the Empire State Building beyond).

I expect it was a mix there of native New Yorkers maybe on their lunch hours, NYU students taking a break from nearby classes, and tourists like myself drinking in the sun and the sights!  For a brief moment though, it was pleasing to imagine I wasn’t just passing through but that I was a native too, entirely familiar with all the ins and the outs and the ways of this town – that New York City was mine!

But alas, I’d passed up my youthful chance to get to know the city and now, decades on, this would only be a “speed date”.  Yet, regardless of the time that had slipped by, our encounter felt to me like those first heady days of a real romance where, once you sense the potential, there are a million things you want to share and a million more you want to know!  Who knew there was life after fifty-f…um…after…well, in any case, who knew?!

It tickles me to think of little things I found so charmingly different about this brainy, brash and brusque character I just met!  Like I loved walking downstairs from street level to dine in a restaurant.  I marveled at riding along avenues lined with buildings so tall and tightly spaced that it was like being in an urban Grand Canyon.  And I appreciated the eclectic mix of old and new architectural features – even when I didn’t quite get them.

Yes, I had a nearly perfect first date (I mean, the sun was shining in February and even my planes were on time!).  But of course I realize there’d be more effort and difficulty if I committed to a real relationship – something tells me the city wouldn’t have it any other way.  Simply from walking around Manhattan, I feel I got a sense of all kinds of the lows and highs that might follow.  From disillusionments to delights, reverses to restorations – even from the shattering to the sublime.

I saw all that in New York during our brief rendezvous.  To me, the city seems a glorious paean to the possible!  Whatever else a relationship with NYC might prove to be, no doubt it would be unforgettable – and worth it!

So do New York and I have a future?  Ah, I dunno.  But if our paths cross again, I’m gonna try to go into it with a whole lotta confidence and hope – cuz I think it could be good, ya know? 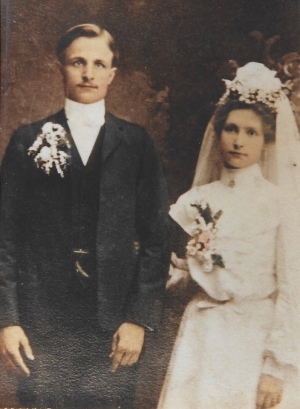 Many thanks to Dee’s mom Judy for her kind hospitality!  Also, cheers (and děkuji!) to Dee and Dedrie for their lovely company – and their incredible patience with my pausing every few feet for a photo!