The Travels With My Mum Bit

Breakfast with the Acropolis!

Springtime greetings!  For the month of May – Mother’s Day month! – I’ve been sifting through photos and memories from amazing trips I’ve shared with my mother over the years!  It got me quizzing Mum about whether as a kid growing up in the Midwest, she ever imagined she’d travel to places like Australia, Greece and China!

How does a girl from Ashtabula, Ohio end up seeing so much of the world?  Come along on a little tour and see!

Maybe Mum’s traveling tendencies had their roots in a childhood filled with – well – with being uprooted!  Grandpa was in building construction through the difficult Depression days when the family simply had to move to wherever the work was.  During World War II, they moved about every six months while Grandpa helped build military camps (like Camp Atterbury in Indiana) and retool factories to support the war effort.

Mum and Grandma on the porch at Aunt Jenny’s in Ashtabula!

That meant Mum had to start at one new school after another and make new friends over and over again (a prospect that makes me cringe just thinking of…).  I feel like Mum not only survived but thrived in those itinerant days by honing a charming craft she still possesses for quickly discovering common ground and kinship with new people she meets!

And maybe a necessary comfort with change made it easy for Mum at just 16 to board a train on her own to arrive early one morning in Grinnell, Iowa where she’d earn a bachelor’s degree in Political Science from Grinnell College.  Not content to stop there, Mum went on to the University of Wisconsin in Madison where, while serving as house fellow to 50 girls in a dorm, she picked up a Master’s Degree and teaching certificate, and somehow found spare time to play bridge – which is how she met my dad!

Now on the surface, marrying a Doctor of Plant Pathology with an acute aversion to flying might not seem the key to a lifetime of world travels.  And Mum might have figured she’d finally settled down when Dad took a job with the Wisconsin branch of the Forest Service and the young couple bought a quaint little lakeside house in Rhinelander and started a family.

But then Dad got an offer to teach at UC Berkeley.  So despite having a new baby and a new mortgage, the folks thought the offer too good to pass up and, without hesitation according to Mum, pulled up stakes to drive (rather than fly, of course) out to California!

As Dad’s career progressed, work would take him to lots of interesting parts of the world like Guatemala and Britain!  On those occasions, he’d reluctantly leave Mum behind to keep my two big brothers and me out of trouble (quite the task), and would gamely pledge not to enjoy the trips at all without her.

While these were relatively short excursions, Dad also got a chance in the late 60’s to take a sabbatical to study tree diseases in Australia!  Mum doesn’t recall having any qualms on this occasion either about packing up again to journey by ship (rather than fly, of course) and spend a whole year not just in another time zone but another hemisphere!

The yet to be completed Sydney Opera House!

Later, when we kids had flown the nest and Dad’s work called him twice to China, Mum was delighted to be able accompany him – with license now for them both to enjoy the adventure!   On one of these trips, she even scaled the steps of the Great Wall – a place in which Mum tells me she sure never thought she’d find herself!  There are no pictures of the moment since my energetic Dad had forged ahead with a colleague leaving Mum to negotiate steps that were becoming increasingly higher and tougher to manage.  As Mum paused for a breather, she noticed a Chinese family reticently gauging her progress.  Ever the maker of friends, Mum cheerily hailed them with the greeting she’d been sure to learn before embarking on the trip:

The countenance of every member of that family instantly brightened, and they all rushed over to lend a hand in getting Mum up those storied (if steep) stone steps!

Dad’s professional opportunities to see the world were just a prelude though to Mum and Dad’s getting to indulge their shared love of travel in retirement – and sometimes, I was lucky enough to get to go along! Twice, I got to meet up with them to explore the roots of Mum’s side of the family in Finland!  Mum was able to recall some of the Finnish she’d picked up from her childhood days among numerous relatives in Ashtabula – and she added “Spasiba” so she could properly thank people on our side trip to Russia.

As if a second trip to Finland hadn’t been lovely enough, it represented a chance for me to recapture some photos I’d lost from the first trip when a roll of film didn’t advance in my camera (another way of saying I didn’t load the film properly…).  I’d been heartbroken at the time, but was delighted to have the chance to re-photograph places like the ski jumps in Lahti!

When I got there that second time though, I was disappointed to find that the booth where I’d purchased a ticket before to take an elevator to the top of a jump was closed.  But while I was dejectedly walking away, Mum inquired at a nearby kiosk and discovered tickets were now being sold from there.  So because of her determination, I was able to retake my dizzying top-of-the-jump photo!

View from the top (thanks to Mum)!

88-year-old Mum and I haven’t traveled internationally for some time – but we haven’t stopped traveling entirely!  A couple years ago, we road-tripped to Palm Springs which put us close to Joshua Tree National Park.  As we happily dined in a fancy Indian Wells hotel restaurant and enjoyed some live music, I asked in passing if she felt up to going on a little side adventure into what was unknown territory for us.

Well, there it is then:

Just getting ready to explore (wearing a similarly keen expression)!

We’re also making plans for a little road trip this summer which will include a stop at our favorite section of the California coast!

Out on a coastal trail!

Whew!  So how did that little tot on the porch in Ashtabula make it to all those amazing global destinations?  Well, with some very good fortune – no doubt about that!  Also, Mum found a soul mate with a similar sense of curiosity and love of exploration.

I think it’s safe to say I’ve followed their example in those respects!  And it’s been my good fortune to enjoy some positively magical moments traveling with Mum:  like breakfasting almost in the shadow of the Acropolis; wandering breathlessly among the pyramids of the Giza Plateau; and cruising out of the port at St. Petersburg just as the sun was setting and a gentle benediction of rain was beginning to fall.

Checking out the Pyramids!

But I recall the little moments too where Mum’s enduring friendliness and openness to new things made the experiences all the richer – and I expect it’s those qualities that have translated best all around the world!

As May 12th approaches, I’m reminded how fortunate I am for that example too.  And I’ll take this opportunity to say:  “Happy Mother’s Day, my Mummy!”

Spasiba, xiè xie, and of course – kiitos paljon for everything! 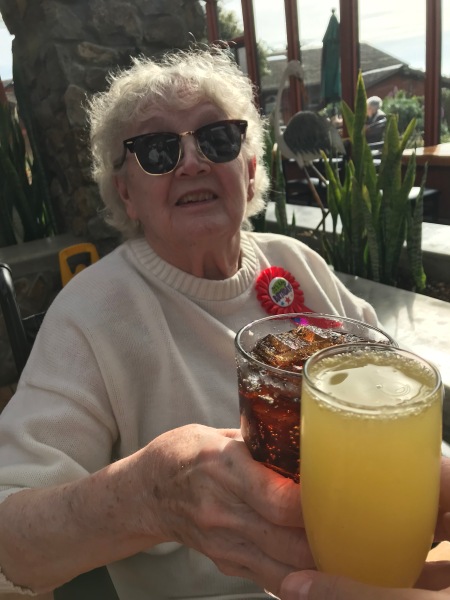