The “Casting to the Rise” Bit 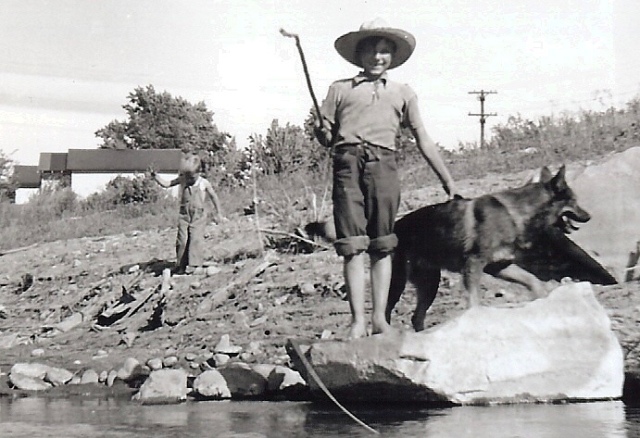 Dad the Fisherman as a barefoot boy.

So before the summer comes to an end, I’m turning things over to a great authority (perhaps the greatest, in my unbiased opinion) to expound a bit on a classic summertime activity.  That activity would be fishing – and that authority is my dad!

I’m sharing here some of the angling chapter from the delightful autobiography Dad left for his family.  Just a few informational notes before I let him “tackle” the subject:

Bandon and The Dalles are towns in Oregon.  Lost Lake is also in Oregon.  And the Deschutes, White River, the Metolius and the Columbia are (you guessed it!) all Oregon rivers that ran through Dad’s youth.  He used to refer in particular to the Columbia and Deschutes as his rivers! 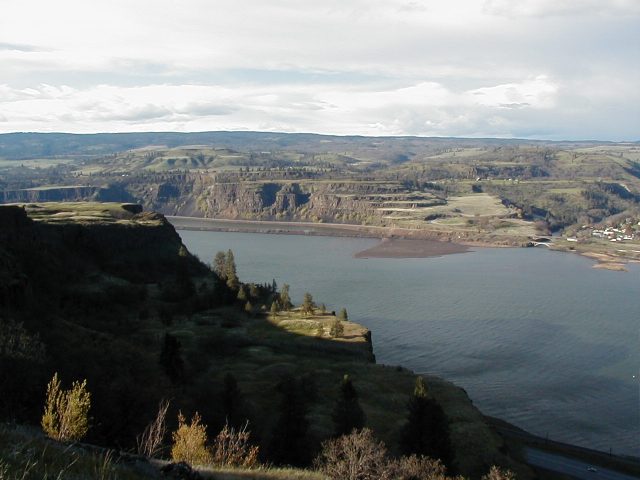 The Columbia – one of Dad’s rivers.

Also, penny winkles sound like they might be cute – but they’re not.  And finally – “crappie” is not an oddly spelled adjective but rather a type of fish (which Dad pronounced “croppie”).

Now, without further ado, here are Dad’s reminiscences about the skills honed, bonds forged and lessons learned during an ardent, sometimes tumultuous, but ultimately everlasting relationship with fish:

I have always liked to fish.  Whether this stems from some primordial, irresistible genes, from early imprinting, or a combination of the two I can’t say.  I know only that pursuit of fish has held a lifelong fascination.  The anticipation and excitement that attend the slightest nibble, the almost imperceptible nudge of bait or lure, the dainty dimpling of an unwary trout, the rod-testing lunge of a chinook or dorado, or the “high” of watching the bobble of a cork must rest in part with some ancient instinct, some reptilian compulsion.

I have very early memories of the look, smell, and feel of fish.  No doubt the tall, highly-animated tales, the outstretched arms, and the warm camaraderie of Dad and his fishing friends did much to foster deep-seated instincts.  I can even believe that language sprang from the need among troglodytic anglers to share and to embellish tales of fishing exploits.

From cave to kiva, to condo, there is something basic in all of this. 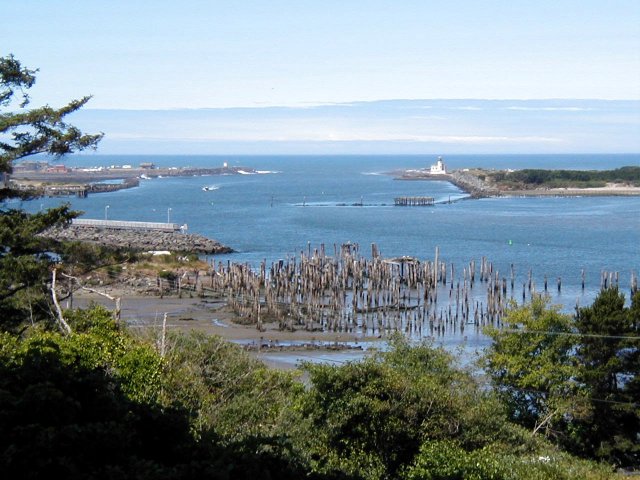 “Bandon by the Sea”.

Perhaps the earliest recollection I can retrieve is attaching a pin to a bit of string and dangling that less-than-elegant gear in a Bandon tide pool – to no avail.  I can still remember the excitement of anticipation and of course the frustration and disappointment that ultimately become part of fishing. 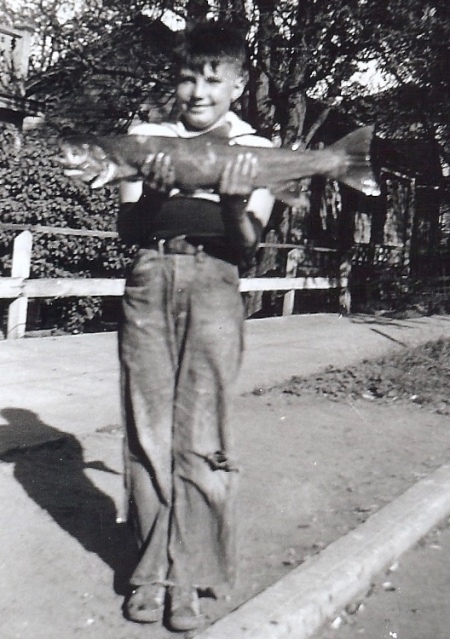 Dad shows off a prize fish.

An equally clear though chronologically uncertain memory I owe to Dad.  At about the age of four, I was attentively following Dad as he worked a stretch of creek when he suddenly told me that he had to “step behind a bush”.  “Hold the rod for me” he said, “and if you feel a bite or a wriggle, reel in the line”.  No sooner was the rod in my hand than I experienced the electric feel that true fishermen live for.  So I caught my first trout at four, and only in later years did I come to realize that I’d been “set up” by a doting father.

After that I was hooked if you’ll pardon the apt metaphor.

First came the unbearable wait for my own, honest-to-goodness rod and reel, which I’m sure that depression-desperate parents could ill afford.  The daily “Did you get my rod today, Dad?” and the glorious day it finally came – a prize of inestimable value – my own fly rod.  This was the humble beginning of a lifelong fascination with tackle and an ever-increasing collection of Tonkin-cane, fiberglass, and graphite rods of all descriptions:  light, medium, and heavy fly rods, pack rods, spinning rods, casting rods, and boat rods, each of course with a special reel and line.  I once counted 25 rods in my den, each one essential to my happiness and well-being as a fisherman. 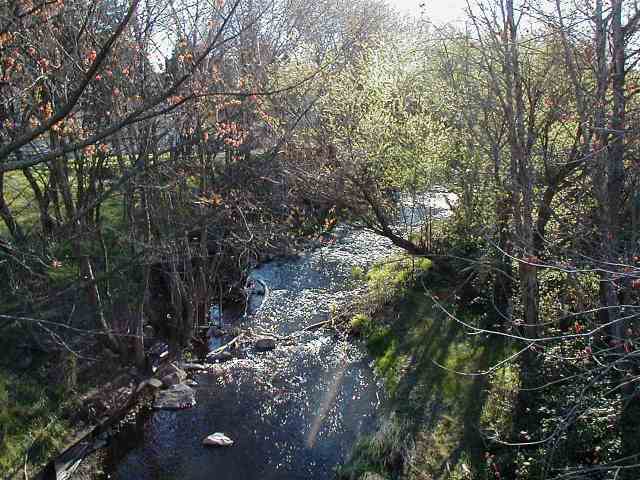 Mill Creek in The Dalles.

At the time of the coming of my first outfit, we were living within a couple blocks of Mill Creek, a small stream skirting the west side of The Dalles.  Countless days of boyhood were spent threading worms, penny winkles, salmon eggs, and other baits on hooks, and learning by trial and error how to present baits to wary trout or steelhead.  The creek was full of what we called bullheads (actually sculpins) which, while worthless were also fair game.  Occasionally I even caught a big carp or sucker.

And a steelhead working its way through shallow water was an irresistible challenge to carefree youngsters who, like rambunctious bear cubs, kicked, swatted, batted, scooped and otherwise stampeded the victim onto the bank where capture was insured (well, almost).

It was at this neophytic stage that I was first exposed to the trauma, oft repeated over a lifetime, of the big one that got away.  To this day I can remember the hole, the strike, and the sheer panic as I snubbed the line and tried to hold a large and energetic steelhead in the shallow, brushy riffle.  With little concept of playing a fish, I let it break the leader and dishearteningly saw it drift down the stream, a dramatic scene that I have many times replayed under a variety of circumstances.

Not only was my patience, skill, and resilience tested at this early age, I also had to deal with one of the real detriments to fishing – a conscience.  After trying for hours to catch a trout in the clear water of Lost Lake, I knowingly caught an illegal trout in the lake inlet, a protected spawning stream where pickings were easier.  It wasn’t much of a fish, but Mom made me confess my transgression to Grandpa Rothery.  For an inherently honest boy, it was a traumatic experience.

Dad returns to the scene of his Lost Lake “crime”.

By the time I became an awkward adolescent, fishing had become a real source of satisfying skill and pleasure.  On many evenings, Mom and I plied our onion-sack minnow net in Mill Creek to pick up live bait for an evening of crappie fishing in one of the Columbia sloughs.  Even when fishing was slow, there were river smells to savor, soft sounds of humming insects, warm humid air, warm sand under bare feet, perhaps a cheery fire, and certainly lots of laughter.

By high school age, fishing had become a peer activity.  Ron became a friendly rival at catching or lying about catching trout.  With other, less avid anglers, we organized numbers of one-day or overnight excursions, mainly on the Deschutes.  Many trips included memorable adventures and that growing feeling of fishing-buddy camaraderie.

I was also gradually initiated into the hallowed fraternity of fly fishermen.

This often meant arising well before daylight, with maybe a stop for hotcakes at some all night cafe before the drive to the river.  I’d saved enough money to buy a good South Bend cane fly rod and a bakelite, single-action fly reel that Dad got for me at half price through a Hudson/Duncan promotion program.  The outfit was sorely needed, since I lost the tip of my first rod when I foolishly tied a line to the tip guide and made a mighty cast into the Columbia.  As hindsight (something I’m good at) made obvious, the tip sailed out with the line and sank.  Such absentmindedness has attended me all my life.

Those early trips with “the men”, mainly to the Deschutes, were among the high points of my youth.  These were the beginnings of a lifelong study of the habits of trout, the water most likely to harbor a fish, the best times of day, the best weather, the best water conditions, the ideal drift, and the many conscious and unconscious  hunches that make up fly fishing.  With much trial and error, I began to develop the eye, feel, sense, and timing needed for accurate casting, for setting the hook at just the right moment with just the right force, and for tiring a fish without losing it. 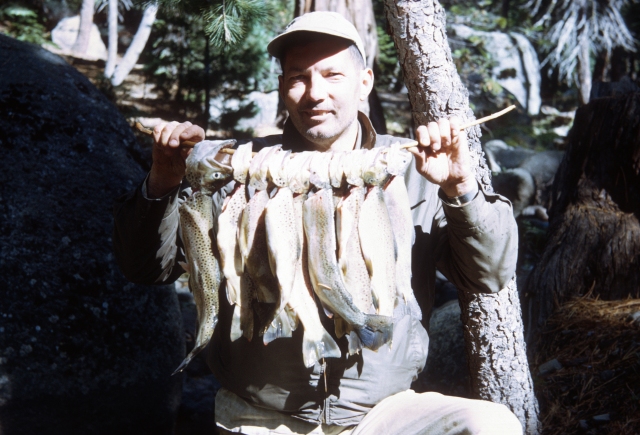 All in a day’s work!

There were streams other than the Deschutes that I liked to fish as a boy.  White River, the Metolius, and a variety of creeks, but the Deschutes was the premier stream.  Where the river could be reached by car, it was still obligatory to hike several miles in the course of a day’s fishing then stagger back on tired, unsteady legs.  I might add that a railroad ran along the Deschutes, and I early found that the ties were diabolically placed so that they were too close together for a tie-to-tie stride and too far apart for an every-other-tie stride.

Over the years, I’ve fished the coastal and mountain lakes and streams of the Far West; the sluggish rivers and green lakes of the Midwest; the inland passage around Juneau; the Sea of Cortez; and the seas off South Australia and California.  There was even one morning on a delightful trout stream in Denmark, where my grand friend Bjarne paddled a canoe. 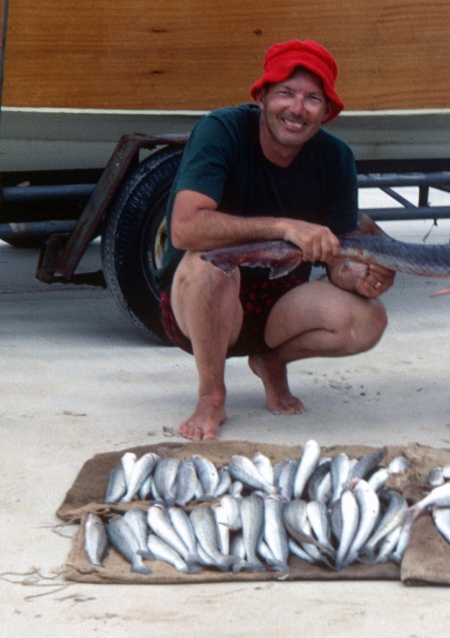 Dad with a bunch of Australian fish!

Dad (probably in Baja) with, um, I’m not sure what that is…

I’ve always found chums to share in fishing adventures and I’ve much enjoyed the camaraderie, competition, and companionship.  I guess my only regret is that I didn’t have more opportunities to spend time fishing with my sons Rich and Jack (I never really expected Amy to become a fisher person). 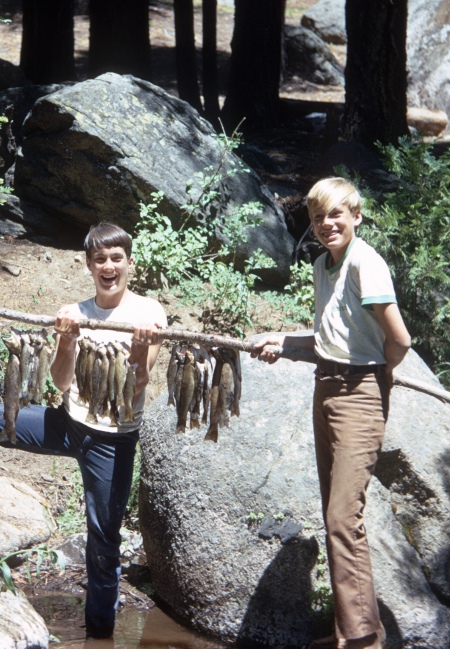 Happily, one of the times I remember most vividly was a day that Jack and I fished a stretch of water near Wood Lake in the Sierras.  You could see the trout feeding at the surface, so we took turns “casting to the rise” and caught many fish while enjoying father/son camaraderie. 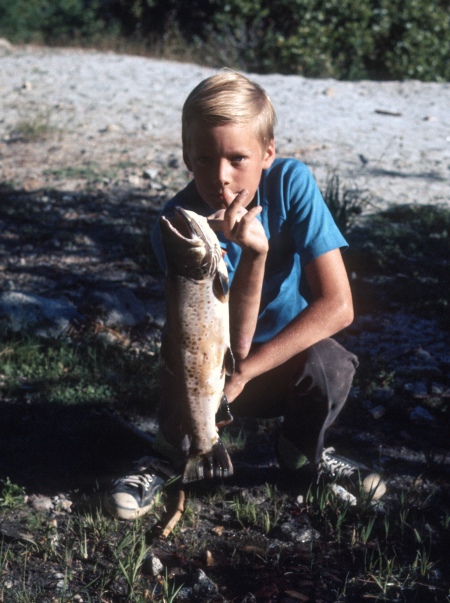 Young Jack with a prize fish.

I never realized the endless and detailed memories associated with this one small facet of life.  I’m confident that I could fill at least one large book on this subject.  Too bad that I’m too lazy to write a big book about fishing, but I’d rather think about catching more fish. 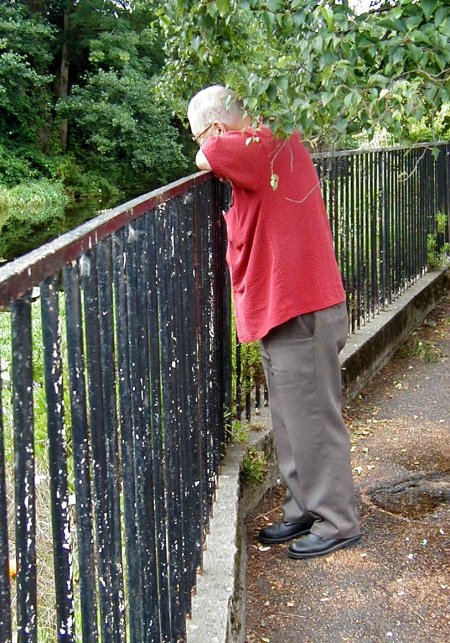 Nearing 80, Dad hunts for fish in an Ashford, Ireland stream.

Thanks, Duddy!  As Dad noted, I’ve never been much for fishing – due I imagine to my not liking to deal with, dispatch or dine on them (except on a nice salmon now and then).   That instinct must have skipped a generation in my case… 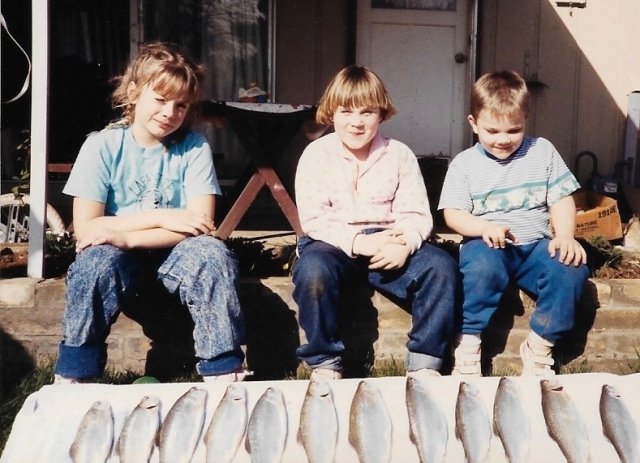 Clearly, the fishing gene was passed to Rich’s kids, posing here (when they were kids) with a pretty good haul!

Anyway, he and I found camaraderie in other streams.  And I’m so pleased to have these images of Dad in those wonderfully vital days when he was out in his beloved nature, in the company of cherished friends and family, and enjoying life to the full – maybe standing hip deep in one of his rivers, casting to the rise. 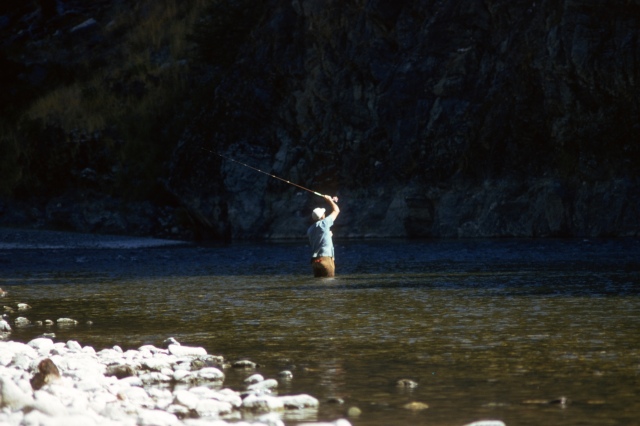