THE GREENWICH “ME” TIME BIT

Whenever I’m lucky enough to find myself in London (my favorite city in the world!), I love to downshift at some point from hectic touring and catch a slow boat to Greenwich – it’s like cruising through time!

I usually try to pack as much sightseeing as I can into a trip because I never know if or when I’ll pass that way again.  But some of my most cherished travel moments have actually come from taking a little time out to let experiences soak in.  For me, indulging in a leisurely boat ride through storied travel landscape is pretty much the perfect way to relax and absorb.

In London, a jumping-off (or sailing-off) point along the Thames for destinations like the verdant borough of Greenwich or the spacious grounds of Hampton Court is Westminster Millennium Pier which rests in the shadow of that most famous and imposing timepiece, Big Ben.  (Okay, I digress but it’s actually the bell inside the tower that’s “Big Ben.”  I don’t like to waste people’s time on such technicalities but afraid I’d rather do that than have them think I didn’t know – sorry…)

Nobly keeping watch over the pier is Iceni Queen Boudicca who fiercely guided her tribe into battle against occupying Roman oppressors in the 1st century.  Did she lead her people to victory?  Well, not so much.  In time though (several centuries’ worth), Rome did retreat from Britain – and yeah, that’s a while to wait for scoreboard, but Boudicca’s is still a rousing tale and her statue is impressive too.

One of the slow boats I caught at Millennium Pier was itself a piece of history!  It was among the vessels of every size and kind that were used to cross the English Channel to Dunkirk in 1940 and collect surrounded British, Belgian and French soldiers in the nick of time so they could regroup and fight another day.  My boat sported a plaque to prove it served in that daring rescue.

Gliding down the Thames to Greenwich is a nice way just to get off one’s feet for a while (something I appreciate as my feet get older with time), but it also provides a wonderful survey of British history.  Here are just a few of my favorite sights along the route:

As a huge Shakespeare fan, I love to drift past the reconstructed Globe Theatre which stands not far from the 16h century original’s south bank location.  All these years on, plays of The Bard’s are still being produced for stage and screen (can’t wait for the upcoming film release of, you know, The Scottish Play).  Just as Ben Jonson declared, Shakespeare truly was “not of an age, but for all time”: 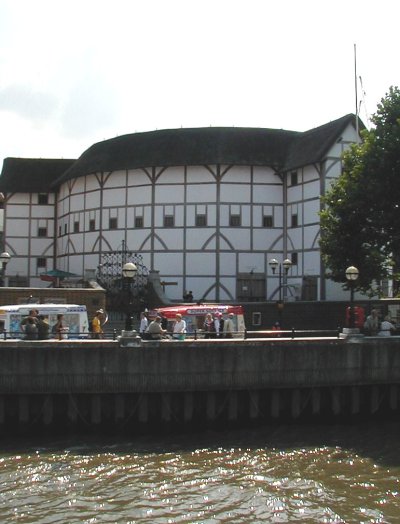 Visible from many points in London (including from the Thames) is Christopher Wren’s 17th century version of St. Paul’s Cathedral.  I once climbed a bunch of stairs to explore the outside of the stately structure and wound up having to press myself into a recess at the base of its dome while a blustery thunder storm passed.  That was excitement enough for me, but St. Paul’s has been the site for much more drama.  I picked up a post card there that recalled a night during the dark times of the 1940 Blitz when, through the devotion of brave Londoners, the glorious building survived bombing and fire to keep providing its own inspirational light:

Farther along is the sturdy Tower of London with its Crown Jewels, crowds and crows.  Especially in Tudor days, I wouldn’t have wanted my boat to hang a left into Traitors’ Gate as that might have meant my time was just about up:

Tower of London and Traitors’ Gate.

Although I try not to be in a particular hurry, it’s still pleasing to arrive in Greenwich to be greeted by a domed entrance to the Greenwich Foot Tunnel that runs beneath the Thames, and by the lofty masts of the famous Cutty Sark:

My last visit to Greenwich was a few months before the 2012 London Olympics, and the Cutty Sark was under wraps being readied for an influx of tourists.  But I’d gotten to wander her decks years before when I was set straight by a guide about the reasons for her fame.

I’d figured the Cutty Sark must have been a great 19th century warship – but her service was actually in the transportation of goods like tea and wool.  Shame on me for not appreciating at first her distinction of being wonderfully swift – and of being a survivor.  She’s outpaced time, and that’s a quality I admire more and more.

Although I’d make a terrible seafarer (I once got sick on a ferris wheel ride…), I’m still totally in love with the sea.  Among exhibits about Captain Cook (an idol of Mum’s) and Admiral Nelson, I was delighted to “discover” Ernest Shackleton who, in 1915, saw his ship (prophetically named Endurance) and his Antarctic exploration hopes crushed and consumed by an ice floe.  But he shifted his aim to leading a rescue mission that raced against time and odds to try and save each and every member of his stranded and desperate crew – which, incredibly, he did.

Across Greenwich Park and presiding over the town from atop a small hill is the Royal Observatory – as my brochure calls it, “the home of time”:

Here you can explore the location’s history of astronomical measuring (developed as an aid to sea navigation) – and you can set your watch while standing right on top of “Longitude O”!

Astride the Prime Meridian.

There are lots of other locales to explore in Greenwich, including the Old Royal Naval College, the birthplace of Elizabeth I and other sites that, beyond having addresses in the “home of time,” have also withstood its test.  I’d like someday to take another look at the Roman site the British t.v. show Time Team excavated further since I saw it – and simply to wander the town proper which in several visits, I’ve never done.

Will I get to stroll Greenwich again?  Will I be able to savor another day of exploring and cap it off with the boat ride back through history, maybe sipping a glass of wine and gazing out the window in the light of a setting sun?  And back ashore, will I get to complete my ritual of standing on Westminster Bridge and mulling over all I’ve seen at and around the mighty Thames as it surges along below?

But I suppose time will tell.

Sailing back to Big Ben.

← THE “DAD DOES HIS BIT” BIT
EDMONTON: THE STATUES, FORTS AND TIMBITS BIT →
Follow TESSEROLOGY on WordPress.com