On such a winter’s day about two years ago, I was not in my home in L.A. – I was sitting on a player’s bench in a Cape Breton Island ice rink in Nova Scotia.  And if I hadn’t been gasping for breath at the end of a recreation hockey championship game, I might have spared a second to wonder:

“How on earth did this happen?!”

Actually, it pretty much makes sense.  I’ve explained before that my thing for hockey is really a matter of genetics (see https://tesserology.com/2013/06/25/the-biscuit-in-a-basket-bit/).  Plus, I’d voyaged ’round this Canadian province before – and I’d absolutely fallen in love.

In 2008, I met up with my folks for a drive around Eastern Canada and, after a delightful time hunting Vikings in Newfoundland (see https://tesserology.com/2013/04/23/the-bit-about-viking-scoreboard/), we caught a ferry to the Cape Breton port of North Sydney.  I’ve always loved the sea – and on our whole ten-day adventure, we were rarely far from it and never far, it seems, from its influence.  I’d have loved to take lots of time at each place we went but, being on a tight schedule, I had to settle for carrying away brief impressions – along with the hope that I could someday chart a course for this part of the world again. 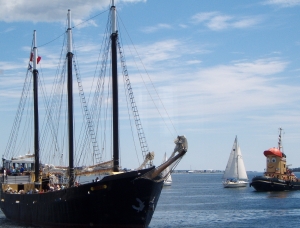 For starters, we only spent a single afternoon in the capital city of Halifax.  Although the day included a delicious lunch right on the water (where Mum got to indulge her newfound passion for Digby scallops), the short stay left us otherwise starving for more of this historic place.

A wise choice given our limited time frame was to hit the Maritime Museum of the Atlantic.  Wandering among the exhibits gave us more of a sense of the area’s history as we learned about things like Halifax’s grim duties in the aftermath of the Titanic disaster, the devastating collision of two vessels right there in the harbor, and the port’s role as a staging area from which mighty Allied ships set off to battle in World War II. 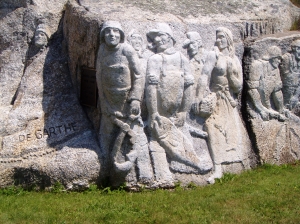 We also made a stop in the beautiful coastal town of Peggy’s Cove.  Under the summer sunshine, every color just seemed so clean and vivid in this gorgeous village perched among the rocks and presided over by a sturdy white lighthouse.

Peggy’s Cove was also clearly inspiring to artist William deGarthe who carved into granite a tribute to local fishermen and their families whose livelihoods and fortunes are governed by the sea.

And I was able to get in touch with my Scottish roots in the town of Pictou where the folks and I toured a replica of the 18th century ship, The Hector.  The original vessel carried emigrants from Scotland on their perilous passage to a new life – maybe my ancestors journeyed in one just like it. 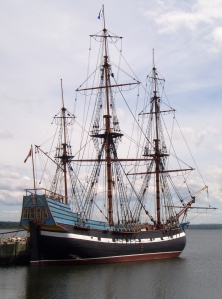 Having barely scratched its surface, it was really tough to leave Nova Scotia.  But I did get the chance to go back in 2012 when my women’s travel hockey team, the L.A. Chill, played in the annual Vince Ryan Memorial Scholarship Hockey Tournament on Cape Breton Island.  For 25 years, the community has hosted a huge tourney with the proceeds going to scholarships for local students.  Years after the first team of “Chillies” was overwhelmed by the hospitality and pure fun of this event, the club still makes it a regular destination.

Although the purpose of the trip was hockey, I couldn’t resist doing a bit more provincial exploring as long as I was there.  My teammate Jen and I arrived early and took off from Halifax for the city of Lunenburg.  A UNESCO World Heritage Site, it’s a charming example of the determination of colonial Brits to arrange their new towns on a perfect grid – come hill or high water.

Jen and I happened to catch some nice warm weather for the time of year – but a monument to those who’d lost their lives at sea over the decades was a solemn reminder that times could be harsh too.  Hardships, gifts, ill fates and new beginnings all seem to be part of the legacy of life on the Atlantic.

After our little side trip, it was time to get down to business.  Well – sort of.

The “fun” tone was set right away when Jen and I joined our teammates to share a bus ride from Halifax to Cape Breton with a men’s hockey team from Ontario.  No sooner did the trip get underway than our driver was pulling off and parking in front of a grocery store.  No one appreciates a pit stop more than I do – but five minutes into our journey?  Yup.  They had to make sure the bus was well stocked with, um – refreshments – for the road.

So, after a pleasant ride through the countryside, a brief ferry crossing, and yes – a beverage or two – our bus arrived in Sydney where I’d first set foot in Nova Scotia four years before.  Although much of our time was spent preparing for games, playing games, and (in my case) recovering from games, we were still able to catch a few local sights, enjoy great live music, and even go to a tournament sponsored dance.

The massive volunteer effort that makes this undertaking a success year after year is just staggering – and it’s even extended to providing our out-of-town team with its own coaching staff.  In 2012, it was Larry, Bill and Devin who devoted the entire weekend to us and were just amazing!  Whether it was coaching advice, equipment repairs, logistics management or just being there with a word of encouragement, these gentlemen were unfailing in their giving.  And it was a family affair too –  Larry’s clan supported us all the way (his son provided the great music!), and Bill’s wife Deana took time out from expert kilt crafting to sew commemorative patches on all of our jerseys in just one afternoon.  Talk about above and beyond!

And how did we do?  Well, with such incredible support, the Chill went out and won that women’s division championship game – and they’ll be back soon to try their hand again.  A while ago, I decided to forgo the trip – and it seemed like a reasonable decision.  But now, as the hour for this year’s Nova Scotia pilgrimage nears, I find I’m feeling this ache…

I expect there are generous spirits to be found anywhere one goes.  Yet, the Chill and I have been lucky enough to come across an extraordinary concentration of them on Cape Breton Island.  Is it something in the water?  Maybe something about being by it?  All I know for sure is it’s a lovely, lovely thing.

Something else lovely about playing travel hockey – and traveling in general – is noticing the ways we change and grow by the experience.  The ways I’m different after my visits to Nova Scotia include:

I get occasional urges for Timbits.  I’ve been photographed with the biggest fiddle in the world (that would be in Sydney).  I’ve watched the t.v. series Pit Pony.  I know the ship on the Canadian dime is The Bluenose (out of Lunenburg).  I pause to follow weather reports that include the Maritimes.  I like a good belt of Fireball Whisky now and then.  And most important, I try to think of ways I can pay forward the many kindnesses I was shown there.

I know now too that this time every year, whether I’m currently navigating calm waters or stormy seas, my heart’s going to grab a warm coat and drift off with the tide – bound Cape Breton way.

And I’ll be Nova Scotia dreamin’…

Timbits on the dash

Best of luck to everyone participating in this year’s Vince Ryan Tournament (including the Rustys)!  And big hugs and best wishes to the Chillies and to the members of our Cape Breton family who time and again make this such an incredibly special adventure!

← THE “CITIUS, ALTIUS, FORTIUS” BIT
THE WORLD ACCORDING TO A FOUR-YEAR-OLD BIT →
Follow TESSEROLOGY on WordPress.com