THE WORLD ACCORDING TO A FOUR-YEAR-OLD BIT 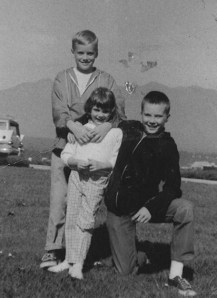 I’ve since recognized the importance of keeping it peaceful at such hallowed places (at four, I might not have been relied on to do that).  In any case, I think the rules there have changed since my rather distant youth but, at the time, I was ready to dash off a strongly worded letter of protest – you know, if I’d actually known how to write…

Would it have been time well spent for me to tour Pearl Harbor at such a young age?  Would I have understood or even remembered?  Possibly not.  You can bet, though, that I remember being left out!

We just can’t know what kids will get out of life experiences.  But, as someone who benefited like crazy from travels with my family, I sure think it’s worth getting out there.

That visit to Hawaii was a stop on our family’s journey by ship to live in Australia for nine months.  And although I’d love to say I remember all kinds of details about the history and culture I was exposed to on that fantastic odyssey, it’s mostly silly memories that survive – like what we ate at some historical place or whether the displays there had buttons I could push.

These days, I keep a journal and take pictures when I travel to help jog my memory later.  If the four-year-old me had kept a record of her views of the world starting with life en route to Australia, it might have included an entry like this:

I’m in a big big boat full of people who talk funny.  I like the funny talking but I really like pancakes and some people on the boat don’t know about pancakes.  I got mad about this and now my brothers and I can’t be in the dining room without Mummy or Daddy.  It’s not fair.  No matter how funny people talk, they should just know about pancakes!

I have loads of fond memories of our life Down Under in Adelaide, like of camping, watching Skippy on t.v., strolling to the fruit and veggie store, and 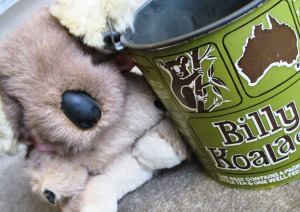 meeting kangaroos and koalas face to face!  It’s kind of a shame though that while I also recall times like our taking a drive to view Aboriginal drawings on the walls of a cave, a log of my perspective on the outing wouldn’t make scholarly reading:

My brothers were older at ten and twelve, but their Australia impressions were still filtered through a pretty young lens.  When Dad exposed them to the sport of cricket one afternoon, they reported back to Mum that, while the finer points of the game eluded them, they did feel certain that the purpose of it was for crowds of men to gather, consume lots of beer and whistle at the “sheilas” (pretty girls).

Back home after our grand adventure, the family’s road tripping continued around the U.S.  We hit historical sites and National Parks by the state-load – although, my takeaways continued to be hit and miss.  Again, a faithful diary might have covered events as follows:

Went to a dry, wide-open place called the Little Bighorn where a man in a hat told us about something called “Custard’s Last Stand.”  I didn’t listen much.  For one thing, it was hot – wavy-coming-out-of-the-ground hot – and bugs were making lots of noise.  I should have listened but it’s scary when bugs make lots of noise and I didn’t see what it had to do with custard anyhow.

Here’s how the high-points of another trip would have been preserved for posterity:

Drove all around Oregon and Washington on our summer vacation!  Saw big mountains with snow on them, fields of volcano lava that dried up a long time ago, a wooden fort, and really pretty forests – except Daddy says some of the trees in them have diseases.  He knows because he’s a professor of plant pathom…pathol…um, he knows because he’s a tree doctor.  My teacher wants me to tell the class about my trip.  I’m skipping all the nature and history stuff and am just going to share that we toured a place in Tumwater where they brew beer – I’m sure that will make my teacher happy!

A shift in my thinking did occur during one of our family jaunts – and my travel sensibilities haven’t really changed to this day (including my unfortunate dislike of bugs…).

Mum and Dad took me out of seventh grade classes for a two and half week trip from California to Louisiana.  Dad was attending professional (“tree doctor”) meetings in New Orleans and he didn’t much care for flying, so we packed up the car on a crisp November day and headed out across the southern part of our country.

The folks and I did all kinds of wondrous things in New Orleans!  We rode on a steamboat, saw the Louisiana Purchase, heard the Preservation Hall Jazz Band, and found the actual “Streetcar Named Desire” – all while devouring plenty of “po’ boy” sandwiches and pralines! 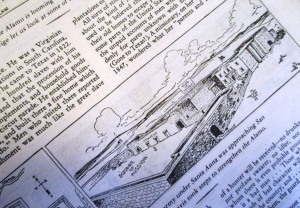 But it was at a stop along the way where I got a feeling I hadn’t had before – at the Alamo.

I’d seen the Disney movie with Fess Parker as Davy Crockett – and I was surprised when we rolled up to find that the familiar Alamo mission façade wasn’t out in the open but was nearly choked on all sides by the encroaching city of San Antonio.

Once inside though, the vibe definitely changed.  According to the journal in my mind, it was like this:

Saw the Alamo today.  Lots of traffic noise outside but, once we got into the main building, it was quiet and cold and felt like we’d gone back in time.  I wandered around reading everything about the fighting there and how lives were changed and lost because everybody wanted this place.  I saw a long list of people’s names who decided to stay at the Alamo and defend it even when they knew they couldn’t get back out.  It was something to think how all those people had been right there – right where I was walking around.  I felt like the walls were trying to tell me more about what happened.  I really tried to hear them.

That was the first time I remember feeling the gravity of a place.  Of being called to from the past.  Ever since, I’ve kept folders with brochures and keepsakes from my travels – reminders of what an amazing mobile education I was lucky enough to have!

So, as it turns out, I “remember the Alamo.”

And was that travel experience along with all the others – each in their own way – time well spent?

Well, I reckon so. 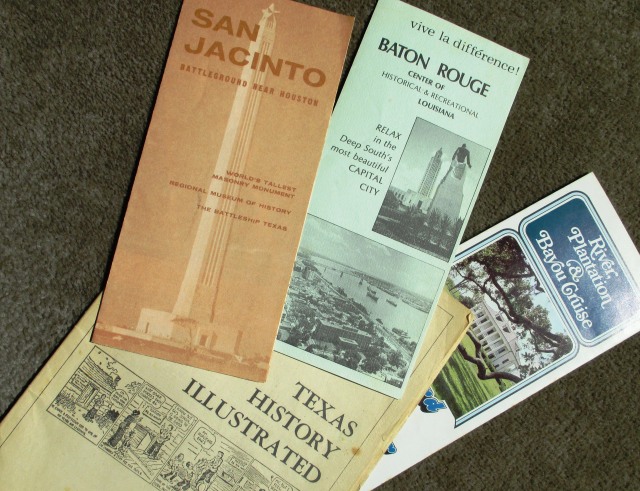 ← THE NOVA SCOTIA DREAMIN’ BIT
THE “WE” IN “TEAM” BIT →
Follow TESSEROLOGY on WordPress.com