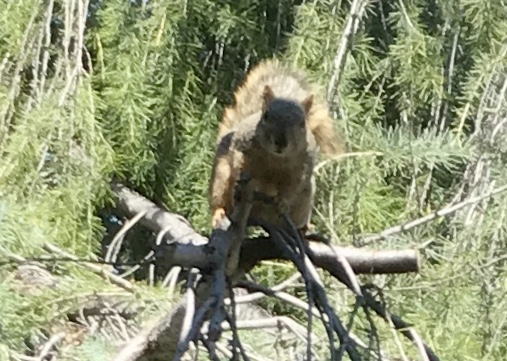 Greetings, all!  Hope this finds you healthy and hanging in there!

As these necessary distancing days wear on, I’ve settled into a routine of alternately exercising, apartment cleaning (kind of a new experience!), continuing to bond with the squirrel quaranteammates outside and, of course – binge watching stuff.

I’ve been sampling current fare (yes, like “Tiger King”).  But I also felt this serious need to circle back to my old friend, Star Trek!

Over a year ago, I’d set myself the goal of rewatching every original series (“TOS”) episode but, typically, I didn’t find the time.  I couldn’t have guessed that my schedule would open wayyy up after that – oh, OR that I’d become a member of Starfleet!

Anyway, I meant the result to be a TOS Top 10 list – but I had a hard time paring something so beloved down quite that far.  Everyone’s got a different measure (Mike?), and this is just my personal take, divided into several categories (because while no one asked, hey, I’ve got the time!).

Okay, so here it is – “Amy’s Top 10-ish Treks”!  There are some spoilers, but I’m gonna guess that if you’re still reading at this point, nothing will be news (and really, this one’s for you)!

Of course, I love the dynamic between Kirk, Spock and McCoy – but many of my favorite eps include love for crew members whose names aren’t in the opening titles!

“The Naked Time” – Yes, he navigates and he tells time, but can Sulu ever swashbuckle too!

“Mirror, Mirror” – Uhura proves that without that thingy in her ear, she can disarm someone of a phaser or just be disarming as the need arises!

‘The Trouble with Tribbles” – Wherein we discover precisely what it takes (as well as what it doesn’t) to make Scotty throw down with a Klingon!

“Where No Man Has Gone Before” – Tweaks to uniforms and job titles would follow, but this series pilot (the second one) introduces life all around the ship I’d come to know and love!

Yeah, some special effects and sensibilities of the original series are of an age but, for me, so much holds up for all time –  especially in some “bottle eps” (episodes of a series where productions save a buck by mainly using existing sets and keeping things simple).  For Star Trek, they’re proof that you don’t even need an exotic planet – just great characters and stories!

“Balance of Terror” – A taut, terrific cat and mouse duel between the Enterprise and a Romulan ship.

“The Doomsday Machine” – The marvelous William Windom drags the Enterprise along as he goes full Captain Ahab in pursuit of a planet killing device.

“Court Martial” – I’m not simply suggesting that you watch this ep where Kirk is on trial for his career.  I demand it!

“Journey to Babel” – The Enterprise becomes a hub of intergalactic intrigue and Vulcan angst.

“Space Seed” – Which guest character has proved so compelling that they keep bringing him back?   “Khaaaaaan!!!”

A way to roam the galaxy while staying safe at home!

“THAT MAN ON THE BRIDGE” EPS:

Spock is such a “fascinating” character – and episodes like “This Side of Paradise” and “Amok Time” that delve into his conflicted but ever-loyal soul are among my favorites.  And I adore curmudgeonly McCoy with his penchant for calling “shenanigans” on everything from Spock’s stoicism to using a transporter.  But my heart has always belonged to Kirk – so he gets a category of his own!  Some of my favorite episodes are those where he’s put on his heels and must make difficult – sometimes devastating – decisions en route to saving the day.

“Errand of Mercy” – Kirk brashly kicks butt and takes Klingon names through the whole ep before humbly acknowledging he might have had his eyes on the wrong prize.

“Arena” – Kirk proves himself both by dredging up a little practical knowledge to defeat a foe, and then by letting him walk (walk verrry slowly).

“Elaan of Troyius” – Kirk’s will to protect his ship and crew can even overcome a love potion that goes to 11.

“City on the Edge of Forever” – Boy journeys back in time and meets Girl, then must choose to lose Girl or set Earth on a terrible new course.

“Bread and Circuses” – Kirk keeps his crew from becoming gladiatorial combat fodder and still finds time to entertain the ladies!

“By Any Other Name” – Great ensemble stuff like Scotty’s taking one for the team by drinking an alien under the table!  But I especially love the moment when, given the chance to stop galactic invaders by destroying the Enterprise and all aboard, Kirk holds out for a better “scenario”.

Can’t you just hear the music that goes with?

So there it is – the result of my “Great Star Trek Rewatch” (and I thank you for your indulgence)!  It truly felt like reconnecting with an old friend.  And because reality isn’t that fun a space to be in right now, I’ll share a recent experience that was next door to a dream come to life for me!

I’ve been enjoying a new “career” as a background performer, and last year I went off to a routine costume fitting for a job – which turned out to be for Star Trek: Picard!  There I was – a lifelong Trek fan being measured for my very own Starfleet uniform!  When I caught myself in the mirror, I could see my shoulders straighten, and I swear I instantly became wiser and more courageous!

But trivial trivia aside for a moment – isn’t that happening for real all around us just now?  Whether in uniforms or PPE’s or ordinary clothes, people are finding the strength within to step up and save lives, and to keep others supplied and safe.

I sure do salute and thank them!

As I’ve shared before, Star Trek has been part of my life for as long as I can remember.  In these frankly dreadful times, I find myself by turns craving escape, enlightenment, adventure, comedy, inspiration and reconnection – and I happen to find them all in this one show.

Your list or favorite series might be different.  But whatever gets you through these days is a good thing.  And may you find your way as pleasant!

Also, do please remember for as long as this takes:

*So everything pictured in this post (everything but the squirrel!) was gifted to me by a lifetime’s worth of kind and dear friends that I am so very blessed to have!

← The Lessons from the Backyard Bit
The Transition Mission Bit →
Follow TESSEROLOGY on WordPress.com