Ghost Towns: The Dreams of the Mother Lode Bit

Once or twice a year, I used to road trip with friends from Los Angeles to Las Vegas – and two things would invariably happen.

First, I wouldn’t get rich playing the slots and would have to road trip straight back to work.  And second, I’d notice the name “Calico” written on the hillside outside Barstow and say:  “Oh yeah – Calico Ghost Town.  I should check that out!”  And I’d keep on driving.

Finally, this May I broke the pattern!  Nope, didn’t get rich.  But I did finally check out Calico – one of many California towns that sprang up in the wake of a mining boom only to face adapting or dying when their reason for being went bust.

I’ve visited a few of these ghost towns, and each has a fascinating – and haunting – character all its own.

I used to think they were called “ghost towns” on account of their being haunted by ghosts.  That may be true – but they’re also cities that thrived until changes of fortune turned them into ghosts of the vital places they’d been.

And after years of cruising past that hillside, I finally detoured off Interstate 15 and out a lonely road to visit one such ghost!

Although lots of towns appeared with the influx of gold seeking “49ers” (or “52ers” in my family’s case), Calico didn’t come into being until 1881.  And it wasn’t associated with gold but with the lucrative (if less romantic) mining of silver and borax.

And even though Calico is ready to accommodate plenty of both day visitors and overnight campers, on this pre-summer morning I had the town largely to myself!  Briefly.  I was wandering its empty main street, easily feeling the “ghost” in “ghost town”, when I was joined by two big bus loads of international tourists who were out (I expect) for a taste of the Wild West like they’d seen in the movies!

It’s not hard to imagine John Wayne’s striding down the street here – and not surprising since what was left of Calico after its heyday was purchased by Walter Knott of “Knott’s Berry Farm” amusement park fame.  With its many attractions, the emphasis seems very much on entertainment.

You can ride a train around the former diggings, pan for gold, or discover that behind most every building facade is an establishment selling food or souvenirs – which I kind of scoffed at until I found a shot glass honoring Civil War General Joshua Lawrence Chamberlain.  (Um, yes I bought it – you just don’t come across one every day!)

(1854 – George Tregaskis is born in Placerville, California [known at the time as Hangtown].)

By strict definition, a ghost town should probably be deserted.  Apparently though, Calico was never entirely abandoned – but who (besides them) is counting?

Farther north in the heart of Gold Rush country, the town of Columbia wouldn’t meet the “deserted” standard either – lucky for us, it’s very much alive!

Established in 1850, an old section of Columbia not only survives but flourishes as a State Historic Park.

Last year’s visit was another occasion where I enjoyed time on my own to absorb the atmosphere – right up until a swarm of school children descended.  And here I had an easier time imagining I was in a proper Gold Rush town.  I strolled through nicely preserved buildings, peeked in the windows of the old schoolhouse, and savored the aroma of stoking fires in the blacksmith shop.

There’s gold panning in Columbia too – and I noticed I could have purchased a panning experience guaranteed to pay off!  I never get those odds in Vegas…

While Calico and Columbia have done delightful jobs depicting the Old West, a very different tack was taken in preserving the town of Bodie as another State Historic Park. 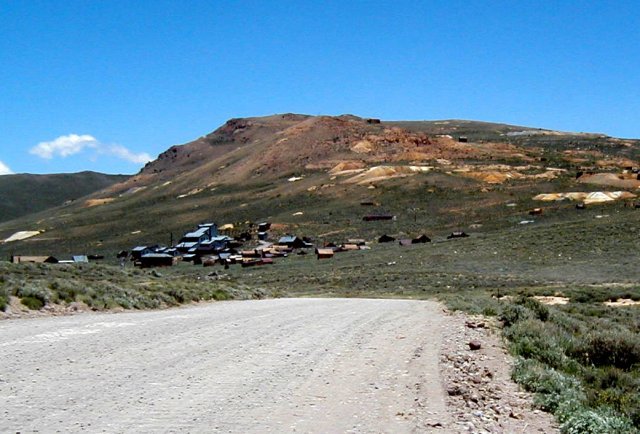 Bodie had a population of around 10,000 in its boom time, but that declined along with the gold supply.  What’s left of the once wild and prosperous mining town now seems preserved right in its death throes – in what’s termed a state of “arrested decay”.

Of the three towns, I found myself treading the most softly along the desolate streets of Bodie for fear of stirring ghosts…

Just outside Big Bear in Southern California, you can hike up a mountainside and inspect the forlorn looking remains of a stamp mill known as the Lucky Baldwin Mine.  It was once owned by wealthy Elias J. Baldwin who got the nickname “Lucky” for his Midas touch with business – and although a city some distance away still bears his name, the town of Doble (formerly Bairdstown), once alive in the shadow of the mine, has died away almost completely.

Other mining towns have avoided that fate by reimagining themselves in order to remain a GPS coordinate.  Like I’ve been thoroughly charmed by the Sierra Foothill town of Murphys that now caters to a grape growing boom.

Murphys Hotel where the likes of Mark Twain and US Grant have stayed – Murphys, California.

The town’s main street is filled with quaint boutiques and cozy wine tasting rooms associated with local vineyards – but the Gold Rush heritage of Murphys is still everywhere recalled.

The “Clampers” at work preserving history in Murphys, California.

(1860 – Ned Tregaskis is served with divorce papers in Downieville, California…)

The Gold Rush is part of my own heritage, and I’ve scattered through here a few facts about one branch of my family that took part.

I’ve been curious about Ned Tregaskis ever since I had the chance to read legal divorce documents from 1860 where witnesses described him as an habitual drunk and unfit husband and father – a characterization he didn’t show up in court to dispute.  It amazes me that even then, the West wasn’t so wild that beleaguered wife Esther Ann couldn’t bring the law down on a deadbeat dad (she must have been a tough cookie!).

Before completely condemning him though, I kinda find myself wishing I knew more about old Ned.  I believe he was born in Cornwall, England (Poldark country!) and emigrated with family to Mineral Point, Wisconsin – both regions known for their mining industries.  Other Tregaskis kin who headed west with him did well as businessmen and ranchers.  I can only wonder whether, like a one trick pit pony, Ned tried to change his stars while sticking with the trade he knew best.  But judging by the birthplaces of his children, Ned may have struggled to strike it rich – time after time, at digging after digging – without ever getting to attach the moniker “Lucky” to his name.

Calico, Columbia and Bodie all offer ghost tours to provide visitors with local stories and legends.  I think though that if these places are haunted, maybe it’s by the dreams of those who once lived there.  Over that relatively brief period, some Gold Rush dreams were achieved in brash and colorful fashion, some were recast into practical pursuits – and all too many were ground down and discarded with the mine tailings.

As I roam the streets of these towns, that’s what I find haunts me…

The next time I road trip out to Vegas, now I’ll be able to look up at the Calico hillside and say:  “Oh yeah – Calico Ghost Town.  I’ve been there!”  I probably still won’t get rich on the trip – but I’ll have enjoyed dreaming for a little while that I might.

And I sure know I wouldn’t be the first. 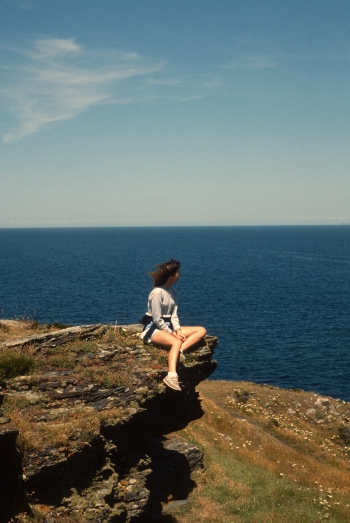 Dreaming on the Cornish coast!

← Ireland: The Unexpected Touchstone Bit (Part 2)
The ‘Twas (Yet) Another Year Bit →
Follow TESSEROLOGY on WordPress.com