I just found this old picture of my Grandpa P!  He’s perched above a scene along the Columbia River that I don’t think exists anymore – at a place called Celilo Falls.  Maybe a couple decades after the picture was taken, water rose up behind the newly built Dalles Dam, and the cataracts of Celilo – along with the livelihood and generational touchstone of many a native resident – were inundated and disappeared.

I never saw Celilo Falls.  So I’m lucky to have this photo and be able to turn to the autobiography my dad wrote for his description of the place and its connection to our family.

Dad grew up along the Columbia River (on the Oregon side) and, clearly, its influence on him was profound.  It even seems to have inspired the literary approach he chose for navigating through his life’s “chronology and community, context and resultant character…in the way that the flow of a river reflects its channel and is colored by the scenery it passes through.”

Columbia River (from the Washington side).

Here are a few of Dad’s recollections of the Columbia and Celilo Falls before it was becalmed by the Dam in 1957:

“Without question, one of the specialest of special places of youth must be the old hometown, the place where you grew up.  For me that was The Dalles, a small town (of about 7,000 as I remember) on the flanks of the Columbia River gorge, in an ecological transition zone between the wet Douglas Fir region and the dry sagebrush of the Columbia Basin.

Along the river there was the ferry landing, a grain elevator, a creosoting plant, and a few canneries (fish and fruit) that provided the town’s industrial backbone.  Railroads ran along both sides of the Columbia River.  The wailing whistles echoed for miles along the gorge, and the rumbling of trains and their giant steam locomotives caused houses to tremble and dishes to rattle at each passing (the solid basalt underlying the area transmitted every vibration).

The Dalles was also near the historically significant fishing site and Indian trading center at Celilo Falls…where the entire river roared over a ledge left by some past lava flow.  Whenever Dad needed fresh fish for the market, he’d drive to the Falls to buy fresh salmon from the Indian fishermen.  Often I’d get to go with him and marvel at the powerful falls, the leaping salmon (there were frequently several in the air at once), and the Indians clinging to their dipnets and fighting for footing on flimsy, makeshift, wooden platforms perched precariously over the torrent.

At the height of salmon season, you could smell Celilo for miles.  The fish that the Indians didn’t sell were hung on racks (or anything handy) to dry in the sun.  Every shanty had racks of curing fish hanging around it and an unmistakable aroma hanging over it.”

The market Dad mentions is the meat market Grandpa ran in The Dalles.  Grandpa toiled most of his life in the butcher’s trade and was always able to support his family by it – but Dad recalls the creative undercurrents that tugged at him all the while:

The Family (with dog, Jay)

“Dad was a frustrated, would-be opera singer, a first rate story teller, and in his active years, a man of wit and good humor.  I have heard stories to the effect that I was lullabied with operatic arias.  As I am, he was short and stout (for many years downright fat).  He was dark haired but blue eyed and very fair skinned (as I am not).  In his youth, he wrestled, played soft ball (a catcher I believe) and pool, and became a skilled, perhaps even locally famous fisherman.

As was often the case in his era, he had to drop out of high school to help support his mother, sister, and brother.  Thus began his lifelong involvement in the meat business, first in a sausage kitchen and then a retail meat market, six days a week, often up to 12 hours a day.  I’m sure that it was depressing and discouraging, but he was a successful entertainer if not a financier.  Some customers came to the market more to talk with Dad than to buy anything, likely because he was also a master teller of fishing stories and could recount in glorious, colorful details a catalogue of fanciful tales.

I remember well descriptions of Dad’s performances with Aunt Kate (Dad’s sister, also a would-be opera singer) at auditions, hospitals, or anywhere they could sing.  They’d worked up a number of duets, and they often got together in the evening to sing.  I warmly remember listening to them.  Even now hearing some old songs they sang brings fond reminiscences.  I must say with impartial objectivity that Dad had a fine voice.

I doubt that Dad was ever truly happy or contented with life except when he was fishing, singing, or telling stories.  Luckily I spent many happy days with him, fishing and listening to stories about fishing in the ‘good old days’.”

Sadly, I don’t have many of my own recollections of Grandpa – and I never got to hear him sing.

Lost in thoughts of the good old days?

I do recall on one visit though, listening to recordings of other people’s performances he fancied, including the soaring voice of his beloved Luciano Pavarotti, and the stand-up comic stylings of Andy Griffith.  (If you haven’t heard Griffith’s folksy version of Romeo and Juliet, well then friends, y’all go on and find it and I’ll just wait “rat cheer” – I will!)

Since I didn’t get to know much more about Grandpa first-hand (beyond his having quite eclectic listening tastes!), I’m happy to quote and rely on Dad’s summation of the man:

“My thoughts of debts I might owe Dad, biased as they may be by subjectivity, involve his rather irrepressible sense of humor, his striving for honesty and integrity, and his determination to see the right and work for it — not bad life templates.”

Not bad, indeed.  I’m grateful to have that image of my Grandpa P – and the picture of him above roiling Celilo Falls since both are now lost to time.  Apparently, once the dam was put into use, water swept over the area’s natural features and even part of a village with shocking speed.  I guess decision and fate can engulf what had been – right along with what might have been – just that fast…

I understand the reasoning behind building The Dalles Dam, and the other dams erected along the Columbia to calm its once treacherous waters and harness its might – but as I’ve indicated before (about the Hetch Hetchy Dam in “The Whole Dam Bit”), it’s a grudging understanding at best.  Because of them, Dad was among those who couldn’t go home again to quite the same thrilling and unpredictable Columbia that coursed through his boyhood:

“The river was a big part of my growing up.  Its rapids and falls were awesome displays of nature’s power, and its broad expanses of slow, calm water were pictures of placidity.  The towering escarpments of basalt had a grandeur and a beauty (at least to me) that were a perfect backdrop to the great, carving current.  Dams have destroyed the river.  It’s just a series of lakes now, but I will always remember it as my special, wild, majestic embodiment of nature.” 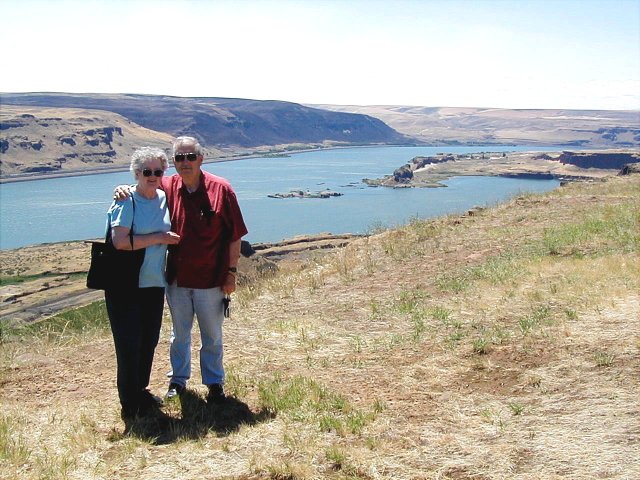 Mum and Dad on the Columbia near Maryhill Museum (looking back, I believe, toward The Dalles).

A nonprofit group called The Confluence Project has been creating artistic and educational tributes along the Columbia that I bet Dad and Grandpa would have appreciated – especially the final one going in at Celilo.  Designed by Maya Lin, the piece will be a walkway reminiscent of the tribal fishing platforms of which Dad once stood in awe as a barefoot boy – and I can’t wait to see it completed!

I’m looking forward to strolling out over the water and, if I’m able, wandering back through time.

Grandpa P with my big brother, Rich (when he wasn’t very big).

I plan to close my eyes and listen hard in case a breeze might carry to me whispers of the long unbroken span of local native life and culture.  Whispers of Dad’s joyful boyhood adventures.  Of Grandpa’s epic tales about the fish he landed.  Of a few that got away.

And maybe of an opera lullaby.