The “Doin’ the Ruins” Bit

That’s what Dad called the trips he and Mum took around the Mediterranean.  And twice I got to along to see firsthand (among many other amazing things) just how far the vast arm of Ancient Rome used to reach – including to a once posh neighborhood on the island of Cyprus.  It wasn’t my first time “doin’ the ruins,” but those sun-baked columns and foundations made a lasting impression on me – and make me think about what impressions we’ll be leaving of our time.

When our cruise ship docked at the city of Limassol, we were greeted by a tour guide who warmly welcomed us to the “Island of Love” – birthplace of the goddess Aphrodite!  At least I think that’s what our guide meant even though her charming Greek accent made it sound like we’d landed on the “Island of Lava” – which would have been hot in its way, but far less romantic.  Anyhow, all confusion was cleared up by our first stop of the day.

After a short bus ride along the sparkling coast, we paused at Aphrodite’s Rock (Petra Tou Romiou) where the goddess of love herself was supposed to have emerged right from the sea foam.  One legend about the rock says that if you swim around it three times you’ll find true love.  I laughed at the time – but now I’m wondering if it might have been a better bet than online dating…

Our next destination was the southwestern city of Paphos (Pafos) and Paphos Archaeological Park – a UNESCO World Heritage Site and a zip code prized over the centuries by a number of ancient civilizations, including Rome.

If I’d been an Ancient Roman realtor, Paphos is the place I’d have wanted to make my speciality!  With the gorgeous ocean views, elite and powerful neighbors and I’m sure good schools or tutors, these villas would have sold themselves!  I was awed by the sheer number of excavated foundations and ornate mosaics that are still so clear to see.  It was like a big field of floor art!

I’ll bet the status conscious owners couldn’t imagine that centuries later their homes would be identified by the flooring choices they made – they were probably just trying to keep up with the Junii. 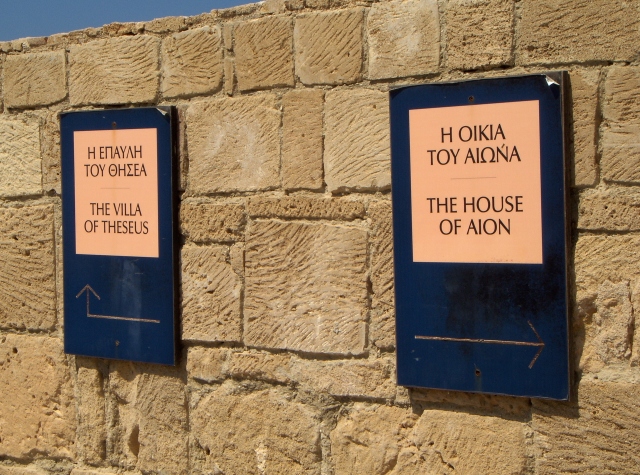 The other town we visited on Cyprus was Kourion – another picturesque spot that would have been a realtor’s “location, location, location” dream!  After lunching within sight and sound of the inviting Mediterranean waves, the folks and I got a look at some of the area’s imposing ruins, including a villa and theatre where I imagine there were performances that matched the drama of the seascape below. 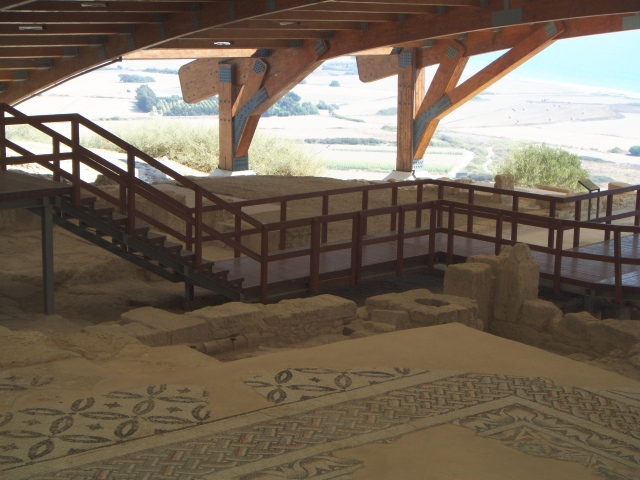 Villa with a view at Kourion, Cyprus

Sadly, I guess these showplace structures couldn’t escape devastation from earthquakes that proved indifferent to the wealth and status of their builders.  But it sure must have been nice there while it lasted – and when in Ancient Rome, I’d have wanted to do as these Romans did!

After “doin’ the ruins” over several trips, I came to see how it would have been hard to be in this neck of the world and not be part of that real estate hungry Empire back in the day (although clearly the Romans could have benefited from some Natural Hazard Disclosure rules).  Seems like if you weren’t in Rome, all you had to do was wait a few minutes, like one does for a change in New England weather, and sure enough you would be.

Back in 2000 (a slightly less distant day), I was dazzled by the movie Gladiator and the way it restored those ruins for the screen to all their grit and glory.  And was I ever smitten with Russell Crowe’s Roman general Maximus!  When he earnestly declared that “Rome is the light,” I totally bought in.  On reading up a bit more though, I learned that at the end of that far-reaching arm of Rome’s was a crushingly heavy hand – and for whatever light Rome shed, there were other lights it callously extinguished.

Even so, I just can’t deny the Empire has still cast a spell over me wherever I’ve caught the flickers of its light.  During my visit to Cyprus, I spotted a 19th century lighthouse among the Paphos ruins that brought to mind the first piece of Rome I remember seeing – years ago and many miles away.

I’d studied some in college about ancient civilizations and what I used to call “the old stuff” they left behind – but it was quite another thing to grab a backpack one summer and set off on a European tour to see that “stuff” for myself.

I arrived in London and headed right out for a solo pilgrimage to Canterbury and Dover.  Maybe the jet lag left me giddy, but it all seemed like some fantastic board game I was getting to play!  There I was with a bunch of gold-colored pound pieces and different colored bills that I could plunk down to take in things I thought would only ever be interesting reading for the next exam!

I was at Canterbury Cathedral!  And I was at Dover Castle, strolling chalky cliffs, bounding up stone steps and peering through arrow slits straight into the past!  I was terribly impressed that this medieval fortress had not only withstood the ravages of its own era but of everything hurled at it and dropped on it by the generations that followed.  What a long and tough stretch to have survived!  But there was another feature at Dover Castle that catapulted my perception of time and humanity back even further:

Probably built in the 1st century after Rome successfully invaded, the lighthouse (along with a twin that didn’t stand the test of time) would have had a fire burning in its top to guide ships in the harbor below.

It was almost too much for me to grasp that I could be standing beside something of so great an age!  And just like when I was a little kid visiting the Alamo, I remember listening hard in the vain hope that the stones could speak to me.  I wanted them to tell me whose way they’d lit and everything they’d seen.

Years later, I find myself pondering what will end up “speaking” for my age.  What pillars and foundations will we leave behind?  What beacons?  In another line from Gladiator, Maximus rallies his troops for battle by impressing on them (in Crowe’s husky, gravitas-y voice!) that what they do in life “echoes in eternity.”  Thinking of the mosaics of Paphos and the lighthouse at Dover, I wonder whether in ways we can’t possibly know, that really could be true.

And it all makes me wish I had more answers than questions by now about life, love, the environment, politics – flooring…

Then again, Rome wasn’t built in a day, right?  Hopefully, I’ve got time to keep listening, learning and trying to sort things out – and whether it’s politics or parquet, for the sake of the generations of citizens (and maybe even tourists) to come, I’ll try to make my choices with care! 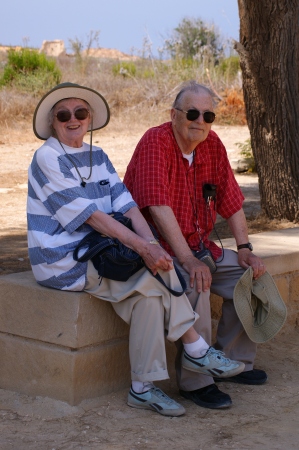 ← A Tidbit
The Bit Where Belushi Leads Us To Our Cup →
Follow TESSEROLOGY on WordPress.com