THE SERENITY BY THE SEA BIT

I find something fantastically calming about staring out across an ocean.  And a favorite place to work on my saltwater woolgathering has been the magnificent stretch of Pacific coastline around Florence, Oregon.  My family’s moved on, but I still have business to do there – I just need to remember while I’m at it to stop and smell the “rhodies.”

My folks retired to the charming town of Florence where they lived for close to 20 years, and I adored catching up with them there.  It’s at the end of a picturesque 60 mile drive west from the Central Oregon hub of Eugene – and whether your interest is relaxation or recreation, Florence is a delightful place to indulge.

For pure sightseeing, there’s the rugged coast dotted with landmarks like the majestic Heceta Head Lighthouse.  Nature lovers (especially those who like their nature noisy and aromatic) can check out the large and lively Sea Lion Caves, and at certain times of the year can watch for whales.  The action-inclined can find locales for boating on scenic waterways or motoring around the dunes.  And Florence plays host to annual events like the Rhododendron (“Rhody”) Festival in May and a traditional celebration in its Old Town on the 4th of July. 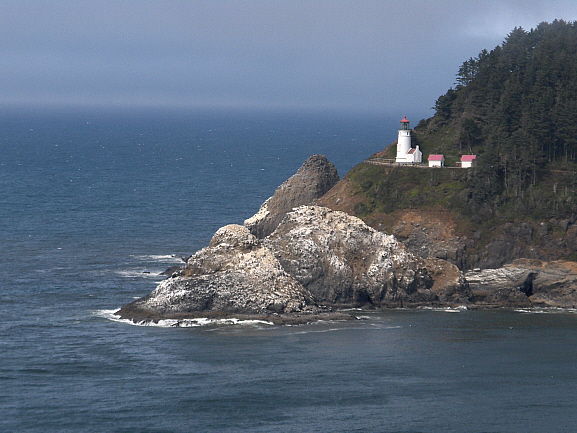 I made a quick trip on my own to Florence last year and, despite all those temptations, I arrived with only business in mind.  There’s nothing I love better than traveling but it sometimes takes me a bit of time to unwind – and even though my luggage for this two night stay was supposed to be just carry-on, I showed up with all sorts of other baggage…

My first morning there (in the ocean-view room to which I’d treated myself), I was rudely awakened in the early dawn by the piercing screech of a seagull which triggered an immediate avalanche of “to do” items tumbling around my brain.  Grudgingly recognizing I might as well get on with it, I struggled out of my comfy bed (I’m not good with getting up early…), stumbled to the window and yanked aside the curtain, bracing to let a lonely day of chore-doing hit me between the eyes.

But then, waiting outside like some longtime faithful friend was that vast and mesmerizing Pacific Ocean.  Through the morning fog, I could make out row after row of white waves boiling along the shoreline.  Opening my room’s glass door, I added the steady sound of surf to the moment – and I was surprised to feel the tide pulling my grumpiness away and out to sea.

Later on, romantic couples would be strolling past my window.  Dogs would be cavorting around the sand.  And maybe a few children would be flying kites in the often considerable breeze.  But at that hour, there was only one figure a ways up the beach sitting alone on a log.  I couldn’t tell whether the hunched and bundled up individual was a man or a woman – but I was impressed by how serene this person looked sitting there taking in the landscape.

Not the getting up early part (seriously, I am so not good with that).  But the notion of finding the time – neither intruded on nor intruding – to appreciate a place of beauty.  Yes, I had my list of chores to tend to.  But now I knew that pausing to savor the scenery and call up some sweet memories had to be on the list as well.

The first addition to my agenda was a ramble through Old Town to reconnect with the splendid Siuslaw River.  My visits to the folks always began with a pick-up at the Eugene airport and a tranquilly winding drive to the coast.  I knew it was the home stretch when we crossed the Siuslaw at Mapleton, took a left and began following the river’s meandering course into town.

The Siuslaw used to meander among the dunes so much, in fact, that stone jetties were built to fix a permanent

path for it to the sea.  Shifting sands around the jetty occasionally reveal the skeletal remains of ships that were wrecked along the sometimes treacherous coast.   Mum used to volunteer at the Siuslaw Pioneer Museum where one of her jobs was maintaining a catalog of accounts of these disasters.

Dad took part in the community too, including as a member of a step program.  This wasn’t about addiction recovery or dancing (with Dad, especially not about dancing).  Nope, “STEP” stands for the “Salmon Trout Enhancement Program” – a volunteer effort to promote the growth and health of local fish populations.  During one stay, I helped Dad feed breakfast to a pen full of fingerling salmon.  (Serving food to them seemed fair since, through the years, hefty numbers of them have been served with lemon to me.)

We spent lots of pleasant days on and by the water in Florence.  Dad and I would put our canoe in at Cleawox Lake or Bender Landing to troll for treasure with a high-powered magnet (and if you call hopelessly tangled and busted fishing gear treasure, then we often scored).  And we three loved to wander the inviting trails of Jessie M. Honeyman Memorial State Park. 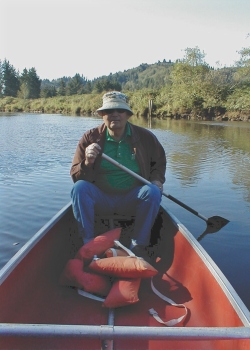 Mum and Dad lived quite close to the North Jetty – and since no visit back in the day was complete unless I’d donned the sand encrusted shoes I kept in the front closet and hit the beach for a walk, I thought I’d do the same on my latest visit.  As many sandy romps as we took, the sea asserted its power in different enough ways to make each experience new.  After a storm, the beach might be covered with wood from fallen trees or even battered docks.  We could find strewn along the beach great clumps of seaweed on one occasion, and on another, dozens of jellyfish that had collectively met some untimely end.  You never knew what you’d encounter on the beach.  And for variety and drama, nothing beat the sunsets!

For me, there’s a spectrum of qualities the ocean embodies.  Those shipwrecks are proof it’s unpredictable and dangerous – but it can also be a constant and generous force.  It makes me feel small, but not in a bad sense.  When I stand at an ocean’s edge (or in it when I’m not paying attention to the waves), with nothing but water for as far as I can see, it somehow moves my cares and priorities into better perspective.

Perspective can be key in a literal sense too.  When I got back to my room after what turned out to be a happily productive and nostalgic day, I was tickled to see the solitary beach gazer was back on that log!  I mean, it couldn’t be the person hadn’t left, could it?  Naw.  I squinted harder out my window.  Or maybe…

It wasn’t a person at all.

In fairness, I hadn’t had my coffee before.  But upon closer inspection now, I discovered the centerpiece of the tableau I’d so admired in the morning was really only a log with a root sticking up out of it.  And with nothing around for comparison, I didn’t realize it was way too small in any case to be the sage and sea-loving soul I’d taken it for.

In the end, I’d been all moved and inspired by a sideways stump.

But that piece of weathered nature, deposited there by the tide, did help me make the most of my brief visit to Florence.  So maybe I saw what I needed to – a reminder from the sea to allow for a little stillness and reflection each and every day.  Or maybe among its other qualities, the sea just has a sense of humor.

Either way, I’m good with that.

← THE PARTING SHOT GLASS BIT
THE “DAD DOES HIS BIT” BIT →
Follow TESSEROLOGY on WordPress.com