VOLCANO AT MY SHOULDER: THE DEATH AND TAXIS BIT

I’ve carried a fascination for the doomed city of Pompeii for a long time – ever since I got to wander its ruins almost 30 years ago (as a mere babe, of course…).  So I jumped at the chance to check out the recent attraction “Pompeii:  The Exhibition” at the California Science Center.  It showcased the tragic time capsule Mount Vesuvius created out of an ancient Roman town – and it reminded me of how Pompeii struck me back in the day as an expression of both sides of the life and death coin we all have to carry in our pockets.

Volcanoes like Vesuvius haven’t had so direct an impact on my life – although they were a presence even before my Pompeii visit.  Like in 1980 when my big brother Rich was getting ready for his wedding and Mount St. Helens decided to erupt.  Although now an Oregonian, Rich wanted to get married in the Bay Area church of his boyhood.  So he drove south early (and with no difficulty) to see to details like renting a suit and meeting with the pastor – but the Oregon-based bridesmaids and groomsmen who’d counted on plane travel ran into postponed and canceled flights after the cataclysm just one state away.

In the end though, there was only one wedding party member whose attendance became questionable.  And this wasn’t on account of the great volcano but of a small detail.  In all the chaos, Rich hadn’t bothered to try on that rented suit until just before his walk down the aisle – which is when he discovered the pants were too small.  Not “Can’t you just suck in your gut for a few hours?” too small, but wayyy too small.  So while the groom and the best man (my other big brother, Jack) raced to find a sartorial substitute, others of us rushed to assure the bride that no, her hubby-to-be wasn’t having second thoughts, and to whisper to the church organist that yes, we needed her please to keep those lovely hymns coming!

I might have seen the wisdom that day in giving active volcanoes a wide berth (especially when event planning), but years later when Jack and I vacationed on the Big Island of Hawaii, we were determined to do anything but.  Not content just to drive to the summit of presently dormant Mauna Kea, tour the Kīlauea Visitor Center and scramble around old lava tubes, we wanted to witness some real volcanic action.   It was a promising sign when we came across a cooled lava flow that had casually reclaimed the stretch of road we were on.  And we could see from a distance the telltale rise of steam where hot lava had reached the coast and was sliding into the sea – so we took off across the bubbled landscape in search of the source.  We wanted to dice with one of those vivid red rivers.  To stand at its edge and feel the heat through our shoes!

Jack and I did encounter lots of lava on the trip – just not the molten kind.  Which probably wasn’t a bad thing.

Through the years, I’ve explored Big Island formations, surveyed scorched terrain around Mount St. Helens and also camped among the stark lava fields of Idaho’s Craters of the Moon.  But for me, the volcanic encounter that tops them all still has to be at Pompeii.

On a backpack tour of Europe during college, my friend Kelly and I made a side trip there from Rome – and we fell for a bit of a tourist trap along the way.  With three fellow American students, we arrived by train and were trying to make sense of a map outside the station when a very helpful taxi driver made the kind offer to take all five of us to the site for a special rate.

Despite our driver’s engaging banter, we couldn’t help noticing that he was just taking us in one very large figure eight.  When our Chatty Cabbie finally pulled over at the entrance to the ruins (actually, the back entrance where his wife just happened to be peddling souvenirs), we were only a short walk from the station.  Ah well – lesson learned.

Now, we turned our attention to learning how the 79 A.D. residents of Pompeii might have earned their keep.  While the explosion of Mount Vesuvius was fatal to this thriving Roman city, the detail it left behind was incredible.  Here were cobbled streets the people once strolled and the facades of homes and shops where they went about their daily routines – all eventually discovered under layers of volcanic ash.

Years later, I’d get to see artifacts from Pompeii right here in L.A. – but on the day, the one non-structural thing I came across was a mesmerizing plaster figure housed in a case.  It was one of a number of casts made during excavations by filling in gaps in the ash which had once held smothered bodies; though the bodies were long gone, what remained were amazingly defined images of the very moments the Pompeiians perished. 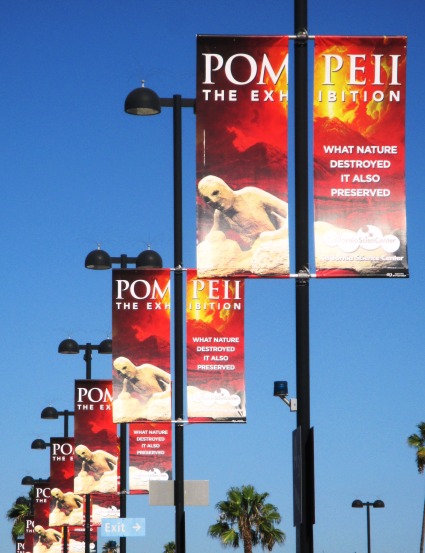 “Pompeii: The Exhibition” at the California Science Center

I tend to look for humor in even the worst situations – but it escaped me there in 1985.  At what was still a tender, unaffected age, I felt as though staring into this cast of an agonized face was like getting a look at Death itself.  Unpredictable.  Indifferent.  Inevitable.  During my whole stay, I never shook the sense that Death still loomed close by in the form of that mountain, carrying a great scythe of lava and ash.  I had an urge to look away or even run away – but for a long while, I couldn’t seem to do either.

There were more of these poignant casts in the Pompeii exhibition, along with all kinds of excavated items the townspeople owned and were maybe even using right before those final shocking moments.  There were beautiful mosaics and brilliant frescoes depicting Roman scenes (including some quite graphic ones that once adorned a local brothel).  There were coins and amphorae and gladiator helmets, tools for plying trades like fishing, cooking and medicine, and shrines at which the residents would have worshipped, with some items situated in displays showing the context in which they’d have been seen or used.

Beyond these finds, the region is still yielding up secrets!  It’s just been in the news that a type of x-ray will now allow for the reading of papyrus scrolls buried by Vesuvius that were thought too charred ever to be deciphered.

And what did I come away with after my brushes with volcanoes?  A few lessons, I suppose.  By getting to walk the streets of Pompeii as a youth, I realized that although we’re separated by centuries, those people and their occupations, preoccupations and fates might not have been all that different from me and mine (well, you know…except for the brothel thing).  And standing right where so many lives were cut short in a devastating fusion of the everyday and the momentous, I thought a bit harder about making good use of whatever time I might have.

Anyway, those would be the big ticket items.  But a volcano was also instrumental in my learning that I really need to try on rented gear just as soon as I pick it up.  And if I ever make it to Pompeii again, this time I’m not going to be grabbing a cab.

← THE ZEN AT THE ATM BIT
THE PARTING SHOT GLASS BIT →
Follow TESSEROLOGY on WordPress.com