I strive to be a supportive friend, I really do!

And when my dear pal Judy moved from L.A. to Ireland, I thought the least I could do was visit her as often as I could, because, hey – I’m a giver.

My support has included:  celebrating Judy’s 40th birthday with friends in a rented Irish castle;  hitting a b&b along the dramatic Dingle Peninsula (twice!); and road tripping through breathtakingly beautiful County Kerry.

Oh, alright.  Of course I know these trips don’t count as being “supportive.”  And I realize I’ve been ridiculously lucky to have so many opportunities to travel around such lovely places.  But this Irish travel luck may make it hard for people to believe me when I still agree with what’s been said about destinations (even amazing ones!) – it truly is the journey that’s the special part.

And the company kept on the journey?  Well, that’s the priceless part.

The most recent time Judy invited me over the Pond (or I might have invited myself – but that’s not especially important), we decided to take a couple of days to explore the mountains and lakes of Killarney National Park.  Although always game, I knew that communing with nature wasn’t as high on Judy’s list as mine – so, rather than making her rough it all the way, I threw in the posh bone of suggesting we stay at The Lake Hotel just outside the Park.

The charming Lake Hotel is situated right on Lough Lein – the Lower Lake – with only the impressive ruins of a 12th century castle standing (well, mostly standing) in between.  Talk about atmosphere!  And, you know, it was the giver in me that went ahead and made the most of the many comforts the place had on offer – but what I really couldn’t wait to do was take a tour through the Gap of Dunloe!  This would be a ride through the Park by a series of conveyances, most of which I’d traveled in before – but not quite all.

Conveniently, we were able to start the tour right from our hotel doorstep!  As it had been blustery and rainy the night before though, I felt compelled to ask at the front desk if, given the iffy weather, the tour would still be taking place.  The concierge blinked a moment, then politely responded she felt certain it would.

Well, I thought it was a legitimate question – but 20 years of living in L.A. may have caused my weather perspective to become a bit skewed.  You get one good downpour here in SoCal and it’s “Storm Watch 2013!” blaring on the nightly news.  Not so much in Killarney.

The gal was right, of course.  A cheery little tour bus did arrive right on schedule, so we bundled up, climbed aboard, and our Gap of Dunloe adventure began!

Around the Park, Judy and I saw lots of people enjoying rides in hired horse-drawn carriages.  As I understand, these are known as “jaunting cars” or “traps” depending on the number of wheels.  I liked the sound of a “jaunting car” – but a “trap” didn’t seem particularly inviting.  I don’t know how that name applies in Ireland but, for me, any vehicle that doesn’t either include a bathroom or take a person by one at regular intervals has to be considered a trap.  (Back in college, it may be that the phrase most often directed my way on road trips was:  “Again?  Are you kidding me?!”  But that’s just not important – and it’s certainly not my fault.)

Anyway, the bus collected a few more tourists in Killarney, then carried our group to Kate Kearney’s Cottage where we had time to browse in a shop, or warm ourselves by a cheery restaurant fire and perhaps indulge in a pint or two (I didn’t dare indulge because, well – please see above…).  From here, since passage by car through the Gap of Dunloe is limited, our trip would continue in a jaunting car pulled by a stocky little pony named Paddy.  Five of us packed pretty tightly into either side of the small cart where we sat facing one another, knees to knees – and before I could even ask whether there would be pit stops along the seven mile route, we were off.

As we leisurely rode along, crisscrossing on all sides of us were steep mountains of gray rock and green growth, the bases of which sort of carved into one another.  Our narrow road wove among these peaceful mountains, and sometimes beside a little river that must have been granted its passage in ancient days as well.

As the way grew steeper, our guide must have judged either that ten knees in one cart were too many even for the stalwart Paddy, or that his passengers looked like they’d packed away a bit too much Shepherd’s Pie – whichever it was, he asked if one or more of us wouldn’t walk for a while and give poor Paddy a break. 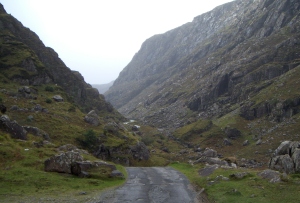 I was actually pleased to oblige.  It was cramped in the cart (which did mean parts of us that were sardined together remained dry in the spitting rain, but I was willing to give that up).  And it just seemed proper somehow to stroll ahead and show my solitary and silent respect for these magical, mist-clad peaks.

Despite the inspiring scenery, I’m afraid the uphill-ness of it got a bit tiring for me.  As I continued on toward the highest point we’d have to reach, I realized my stroll had turned into a trudge.  I needed an emotional boost to cover this last bit of ground before the comfortable downhill part began.

As I was now pretty far ahead of the jaunting car – and it was just me and these wonderful mountains – it was easy to let my imagination take hold.  I decided to think of myself as a regal Celtic queen whose realm covered all of County Kerry.  I found myself straightening proudly, raising my face to the elements and lengthening my stride!  It was a struggle to make the illusion stick, but I kept trying to think:  “Yes!  I’m a Celtic ruler with tons of devoted subjects and fantastic jewelry!”  This was a stretch, but I was managing to stay in the moment and make the spell work.

Right up until this shiny new van pulled alongside me and a woman rolled down the window:

“The tour guide asked me to see if you wanted a ride to the top?”

Inside the van, a darling collection of little soccer playing girls was staring shyly at me, fresh from their victory against a neighboring grade school (local traffic is the exception to the rule against cars).  I started to feel self-conscious.  Did I really look to everybody like I so badly needed help?  How could that be?  I was the Celtic monarch of all I surveyed!

Nevertheless…it may be that I resolved to shake some of the rain off my coat, heave my stiffening limbs into the van’s passenger side and gasp:  “Oh that would be wonderful, thanks very much!”

But that isn’t really important.

(Our journey around Killarney National Park continues in my next post!)